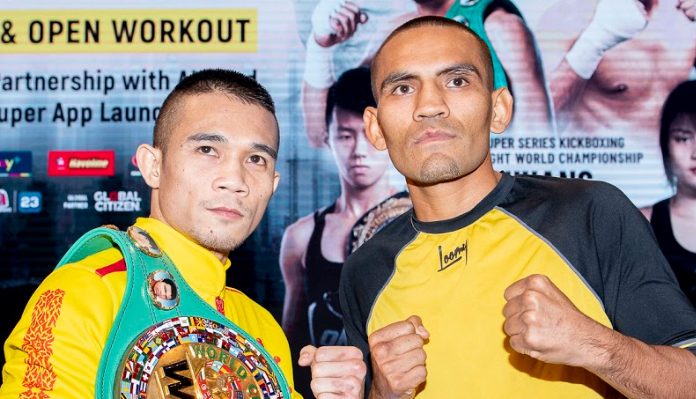 WBC Super Flyweight champion Srisaket Sor Rungvisai (46-4-1, 41 KO) is as battle-tested as any world champion in boxing. On 6 October, the 31-year-old Thai boxing superstar will face his next test in the form of Mexico’s Iran Diaz (14-2-3, 6 KO) in the main event of ONE: KINGDOM OF HEROES from the Impact Arena in Bangkok, Thailand.

Srisaket’s stock has seen a meteoric rise over the past two years. As it stands, he’s eighth on Ring Magazine’s pound-for-pound rankings, and many other boxing pundits may argue he deserves to be ranked even higher.

Following a steady and active path to glory, Srisaket has fought a remarkable 24 times in four years. Over that time, he has taken on the best boxers in his weight region.

Let’s count down the top five bouts of his career.

Srisaket is at his best when he’s pressuring an opponent and countering shots with one-two combinations. This style was on display in this epic battle with the then-undefeated Carlos Cuadras from Mexico, who held the WBC title at the time.

Cuadras had won the title via seventh-round TKO over Ronald Barrera in 2012, and he had already successfully defended the belt three times. Cuadras’ movement and hand speed allowed him to land a whirlwind of power combinations as Srisaket attempted to close the distance and maintain the pressure.

This dynamic helped Cuadras build a lead on the scorecards early, but Srisaket’s relentless approach and ability to absorb the punches coming from the champion became a factor in the middle rounds. Cuadras was beginning to slow down and Srisaket was finding a home for more of his punches.

Unfortunately, Srisaket was penalized a point for an accidental head butt in the eighth round. The clash of heads caused a gash that forced a stoppage in the bout. A ringside doctor ruled Cuadras was unable to continue. By rule, the bout went to the scorecards as Cuadras successfully retained his title based on his early success.

It was a fair conclusion, but we can only wonder what might have happened if the contest had gone 12 rounds. Even in defeat, this bout served as Srisaket’s introduction to the boxing world as a top-notch talent in the super flyweight division.

After winning six straight bouts following the disappointing loss to Cuadras, Srisaket got another opportunity to clash with a respected opponent. This time, he’d go to war in his own country.

Mexico’s Jose Salgado had drawn with the champion Cuadras after battling his countryman to a technical draw in a brawl that was also halted because of accidental head butts.

He came into the bout with Srisaket with hopes of earning another shot at the 115-pound title. Srisaket had other plans. After launching a relentless body-and-head attack on Salgado for three-plus rounds, Srisaket was walking his opponent down in the fourth. Salgado did his best to stem the tide, but with his mouth hanging open and guard exposed, Srisaket’s heavy and precise punches chopped him down and forced the stoppage.

At that point, Srisaket was never more validated as a legitimate 115-pound world title threat.

Roman “Chocolatito” Gonzalez dethroned Cuadras as champion in September 2016. Gonzalez had mashed his way to an undefeated record, the WBC title and established himself as the king of the super flyweight division. Almost no one was given a chance against Gonzalez by oddsmakers and Srisaket was no exception.

According to some sportsbooks, Srisaket was a +950 underdog heading into their bout. Needless to say, Srisaket overcame the odds and again proved himself to be an elite boxer. In his US debut, Srisaket scored a knockdown against the champion with a body shot and later opened a gash on Gonzalez’s head after a headbutt.

Ever the warrior himself, Gonzalez battled back after being dropped and had his moments in a back-and-forth affair that wound up going the distance.

In the end, two of the three judges scored the bout 114-112 in favor of Srisaket while the third had it even. Srisaket had dethroned the mighty Chocolatito via majority decision to finally become the WBC Super Flyweight World Champion.

Because of Gonzalez’s longstanding run as champion, the closeness of the decision and the fan response to their first encounter, the rematch with Srisaket was set up less than six months later. This time, Srisaket would leave no doubt.

From the outset, his punches seemed to have more weight. The new champion did more damage and was clearly winning the battle of body language. In the fourth round, Srisaket scored two knockdowns against Gonzalez. The first came from a hard counter right hand that sent the challenger sprawling to the canvas. He’d make it to his feet, but a calm, poised and focused Srisaket was zeroing in on his target. Moments later, another right hand planted Gonzalez on his back and there was no count as Srisaket had beaten Gonzalez again to retain his title.

The win was much more than just a successful title defense. Srisaket had put to rest any doubts about his superiority over Gonzalez, and he’d done it by winning more emphatically than he had in the first bout. A legitimate star was born, and no boxing pundit could deny him his respect.

After defeating Gonzalez, not once, but twice, Srisaket’s next challenge was proving that his in-ring brilliance was not exclusive to his domination of the former champion. In boxing history, we’ve seen one guy simply have another man’s number many times. Was Srisaket’s two wins over Gonzalez the latest example of that concept?

The 28-year-old Juan Francisco Estrada had put together an exceptional career at flyweight and he’d only recently made the jump up to super flyweight with wins over Anuar Salas and the former champion Cuadras.

A win over Estrada would solidify Srisaket as the man at 115 pounds and prove that he wasn’t simply a bad matchup for Gonzalez, or that he’d caught the Nicaraguan legend at the right time in his career.

As we’ve come to expect from Srisaket performances, it was another war.  The two titans exchanged power shots, counter punches and combinations with Srisaket employing his take-some-to-give-some approach. Estrada’s accuracy and ability to withstand the punches began to wane late in the bout and Srisaket appeared to claim many of the late rounds.

He earned another majority decision victory and had yet again silenced his doubters. Will Srisaket’s upcoming battle with Diaz add to his list of memorable bouts? We’ll find out on Saturday.