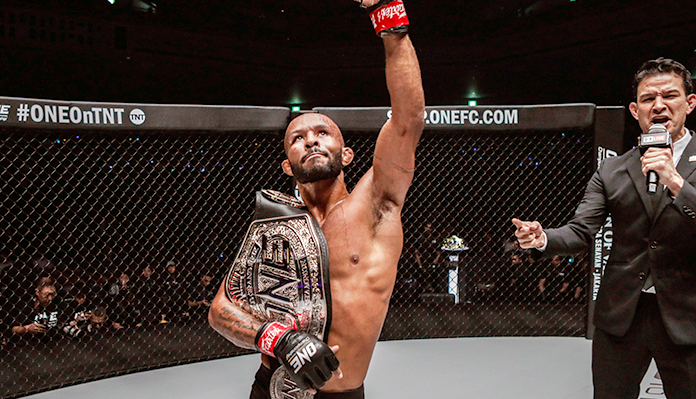 Pound-for-pound great Demetrious Johnson will look to add to his incredible resume when he challenges ONE Championship flyweight titleholder Adriano Moraes.

Johnson will take on Moraes for the world title April 11 in China. ONE Championship founder/CEO Chatri Sityodtong broke the news on his Twitter.

BREAKING NEWS: Demetrious Johnson (30-3) will challenge ONE Flyweight World Champion Adriano Moraes (18-3) for the world title on April 11 in China!

“BREAKING NEWS: Demetrious Johnson (30-3) will challenge ONE Flyweight World Champion Adriano Moraes (18-3) for the world title on April 11 in China!”

Johnson was involved in a blockbuster trade from the UFC for Ben Askren in late 2018 and went on to win the ONE Championship Flyweight Grand Prix in 2019 with wins over Yuya Wakamatsu, Tatsumitsu Wada and Danny Kingad. Winning the Grand Prix earned Johnson the opportunity to take on Moraes for the ONE Championship flyweight belt.

Johnson (30-3-1) is one of MMA’s all-time greats. From 2012 to 2018 he ruled the UFC flyweight division until finally losing his belt to Henry Cejudo at UFC 227 in a big upset. After that fight, the UFC decided to part ways with Johnson and he headed to ONE Championship, where he has gotten back to his winning ways.

Moraes (18-3) is the three-time ONE Championship flyweight champion, having won the title 2014, 2017, and again in 2019. In his last fight, Moraes defeated Geje Eustaquio via unanimous decision to claim the belt for the third time. Overall Moraes has a record of 10-3 in ONE Championship.

Despite Moraes being a three-time champion in ONE, Johnson is still one of the most respected fighters in MMA and will likely be a massive favorite to win the belt despite being the challenger. Although Moraes has had plenty of success in ONE, Johnson is one of the very best fighters in the world and it’s hard to see him losing to anyone not named Cejudo. But Moraes will certainly be looking to do his best for that not to happen.

Where do you rank Demetrious Johnson in the all-time pound-for-pound rankings?