Nate Diaz was not impressed to learn that Jorge Masvidal had pulled out of his upcoming fight with Leon Edwards at UFC 269.

Masvidal (35-15 MMA) and Edwards (19-3 MMA) were slated to collide on the main card of next month’s pay-per-view event in Las Vegas. However, earlier this afternoon news broke that ‘Gamebred’ had withdrawn from the contest due to an undisclosed injury.

Nate Diaz (20-13 MMA), who is a former opponent of both Masvidal and Edwards, clearly caught wind of the news as he proceeded to blast the BMF champion for his actions.

“I fought 3 of my last 4 fights injured. Man up!” – Diaz tweeted and later deleted (see a photo of that below).

Nate Diaz tweeted and deleted this in reference to Jorge Masvidal pulling out of his fight with Leon Edwards 😳 #UFC269 pic.twitter.com/2hJ1QqXXwr

Nate Diaz has not competed since suffering a unanimous decision loss to the aforementioned Leon Edwards at June’s UFC 263 event.

If the Stockton Native is being truthful with his now deleted tweet, that he means he was competing injured during three of his four fights with the following opponents: Conor McGregor, Anthony Pettis, Jorge Masvidal and Leon Edwards. 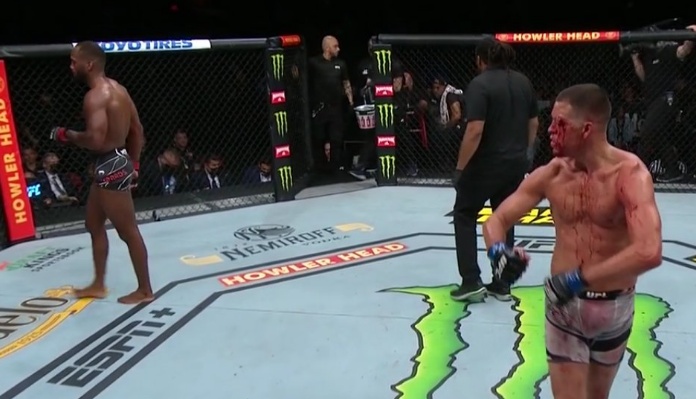 Nate Diaz was not the only fighter to put ‘Gamebred’ on blast for his UFC 269 withdrawal. Masvidal’s former friend and training partner – turned bitter rival, Colby Covington, also shared the following remarks.

“Heard Street Judas The Fragile Guy Is Out With Hurt Feelings…. WHO Could’ve Predicted That?!” Covington wrote on Twitter.

Jorge Masvidal has not competed since April’s UFC 261 event, where he suffered a brutal knockout loss in his rematch with reigning UFC welterweight champion Kamaru Usman (see that video here).

At the time of this article, ‘Gamebred’ has yet to issue a response to either Diaz or Covington for their comments.

What do you think of Nate Diaz blasting Jorge Masvidal for withdrawing from his UFC 269 fight with Leon Edwards?