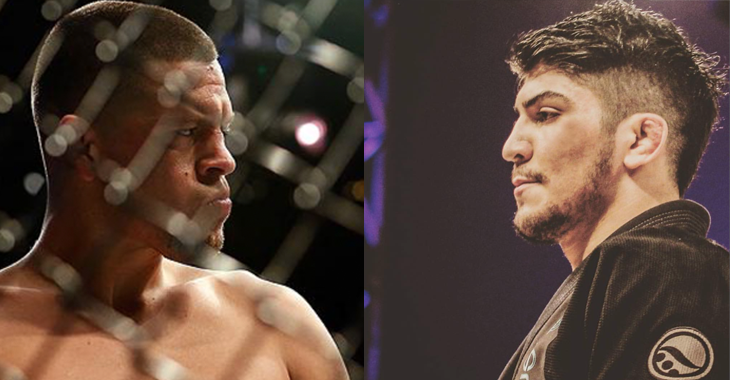 When Conor McGregor tapped to a Nate Diaz rear-naked choke in March of this year, it influenced him to make a complete overhaul of his camp. Part of this overhaul was the introduction of BJJ star Dillon Danis to his roster of training partners. Danis would become an instrumental part of McGregor’s training for his rematch with Diaz – a fight he would win with a hard-fought majority decision.

In the buildup to this rematch with Diaz, Danis fielded many questions about a possible jump to MMA – especially when he himself exchanged a few words with Diaz. On Monday’s edition of The MMA Hour, Danis confirmed with host Ariel Helwani that an MMA career is still very much a part of his plan, and that a fight with Diaz is still a possibility that interests him.

“Maybe we could set up that Nate Diaz fight,” he told Helwani. “He was the one that wanted it, but I haven’t heard anything.”

“Obviously I respect Nate, I think he’s awesome. I think him and his brother are awesome, but he started this. He called me out. So if he wanted to fight me in the UFC, make it happen.” Diaz, of course, has competed in 30 pro mixed martial arts bouts since his career began back in 2004. As such, he’d have a massive experiential edge over Danis. According to Danis, however, Diaz’s experience wouldn’t be much of a factor in their prospective fight.

“That means nothing,” he said of Diaz’s wealth of MMA experience. “That doesn’t mean anything. I always respected Nate. I think Nate’s an awesome fighter, but when he called me out, that’s when we have a problem. But I haven’t heard anything from him about fighting [since then].”

Would you be interested in a Diaz vs. Danis bout, or is this one better left in the realm of the hypothetical? Sound off, PENN Nation!