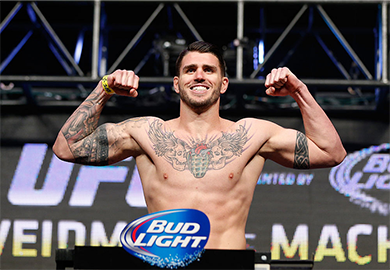 Chris Camozzi dropped a decision loss to Bruno Santos this past Saturday at the UFC 175 prelims. Camozzi was outwrestled by Santos, who repeatedly took Camozzi down and won the fight by ‘laying and praying’. Camozzi apologized to the fans after the fight in an interview with MMAJunkie saying:

“I feel like the fans got cheated on that fight. I came to fight. He came to hold on. All I can say is I didn’t really get hit in the face. He was just holding on. It’s my fault for getting taken down, but at the same time, I came to give the fans what they wanted to see, and unfortunately, they didn’t get it.”

“I train like crazy. I work hard in the gym. Just to come in here and hold on to me and not get to perform or put on the fight I want to is devastating. Now we go back to the drawing board. All I can say is I’m super frustrated. I want to fight.”

A report by FightMetric showed that Bruno Santos landed just 3 significant strikes on the ground, despite having top position for much of the fight; Santos threw just 7 ground strikes.

Camozzi used the opportunity to call out Yoshihiro Akiyama, who Camozzi says “Always comes to fight.”