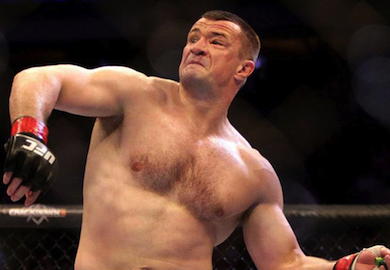 One of the biggest accomplishments in combat sports is to be a K-1 grand prix champion. It’s a high honor for any kickboxer, but for an MMA fighter to also achieve it, is pretty insane. Mark Hunt has done it, Alistair Overeem has done it, and so have the legend Mirko Cro Cop. Not only did he accomplish the feat, but he did it in his own homeland of Croatia. It’s too bad that this achievement from 2013 is still tarnished to this day because according to Cro Cop, he still has never got paid by the owner of the organization. So, he recently put together a little campaign.

“This lovely face belongs to Mike Kim,the owner of legendary K-1 organization. I wrote about him two months ago and I told that he is a cheater who never paid fighters from K-1 Grand Prix 2013. He called the next day and begged me to stop writing and that he will pay. Of course, he is not answering the phone calls and messages since then and I promised him that I will not forget him, and that I will inform K-1 fans, fighters and his business partners as to what kind of man he is. Punks and cheaters like him deserves that. I printed these t-shirts as I promised I would so people will remember his name and his adorable face. This is just first t-shirt, others will be posted later with appropriate banner each time. Please share, because people like Mike Kim deserves that every one finds out what a cheater he is. When he can steal from fighters who fought for him then he can and he will steal from anyone.”—Cro Cop via his official Facebook Unfortunately, he isn’t the only one who allegedly hasn’t gotten paid by K-1. Not just for that event either, but for even more events. That’s why he printed up these t-shirts he’s spreading around social media and giving to other fighters to expose the owner of K-1. It’s hard to believe after five years, Cro Cop has still never been paid. It doesn’t look like it will happen either from what Cro Cop has said in his statements. Here’s another statement a couple of years ago from Dzevad Poturak, who also fought on the card.

“I would like to ask K-1 to get serious and pay the fighters they did not pay at K-1 World Grand Prix in Zagreb. It’s shameful we’ve been deceived that way. Mirko Filipovic, Ismael Londt, Pavel Zhuravlev and me. We fought honorably and we deserved our salaries. I would like to call out all my fellow fighters to join us and support us, because they will deceive you as well. Boycott until they pay us. Samurai warriors do not let this happen in Belgrade and Tuzla until they give what they owe us. We are one.” — Dzevad Poturak via his official Facebook by way of Fight Break.