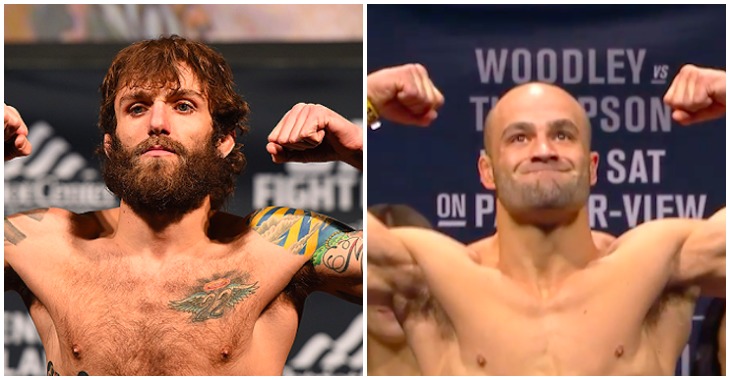 Having been knocked out by Conor McGregor in November, Eddie Alvarez is no longer the UFC lightweight champion. That said, he still seems to have a target on his back, as he’s been called out by several top lightweights over the last few weeks.

One of these lightweights has been Dustin Poirier, who recently defeated Jim Miller in a three-round thriller. Another is The Ultimate Fighter winner and number-eight ranked lightweight Michael Chiesa.

Chiesa made his first calls for a bout with Alvarez during a Q&A in the buildup to UFC Halifax.

“Eddie [Alvarez] lost the title to Conor, but I think it’s a fight that makes sense,” Chiesa said. “Eddie’s a tough guy [and a] former champion in other promotions, but he’s had his time and now I think it’s mine.”

“If he’s man enough to step up to the challenge there’s a big bearded guy in the Pacific Northwest waiting to get in a fifteen-minute fist fight with him so let’s see if he takes the bait,” he continued.

Unfortunately, Alvarez has not taken the bait. On Monday’s edition of The MMA Hour, Alvarez explained that, while he’s interested in a fight with Nate Diaz, fights with lightweights like Poirier and Chiesa don’t really interest him. Despite this claim from Alvarez, Chiesa hasn’t given up, and recently took to Twitter with another attempt to chum the water for the former champ.

@Ealvarezfight I won the hardest season of TUF, ranked #8 at LW. I'll find a new opponent for May 13th since you don't want none.

“I won the hardest season of TUF,” Chiesa said in his Tweet, which was directed at Alvarez. “[I’m] ranked #8 at [lightweight]. I’ll find a new opponent for May 13th since you don’t want none.”

Do you think Michael Chiesa will get the fight he wants with Eddie Alvarez, or is he overreaching by asking for a fight with the former lightweight king? Sound off, PENN Nation!