Home » MMA News » Melendez Comes Out As Huge Favorite Over Healy I M... 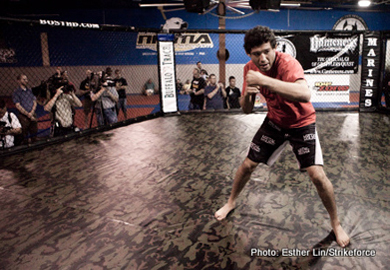 The best lightweight that Strikeforce has to offer opens up as a huge favorite over his next challenger.

Healy is a journeyman of MMA but has fought for Strikeforce for the last two years while compiling a 6-1 record. His only lost came to the latest lightweight challenger, Josh Thomson. With the confusion in the UFC lightweight division as well as the integration of fighters from Strikeforce to UFC nowhere to be seen, Healy comes in as a time-filling challenger who could really turn heads with a win over the heavily favored reigning champ.

For Melendez, another win will mean another challenger in Strikeforce. A rumored (and unnecessary) fourth bout with Thomson would come sooner than later as Strikeforce scrambles to find anyone worthy of drawing fans to the next lightweight title fight. Melendez and fans alike are surely eager to see him and the rest of the Strikeforce 155-pound roster test their mettle in the UFC, hoping to have as successful of a crossover that the WEC fighters had.