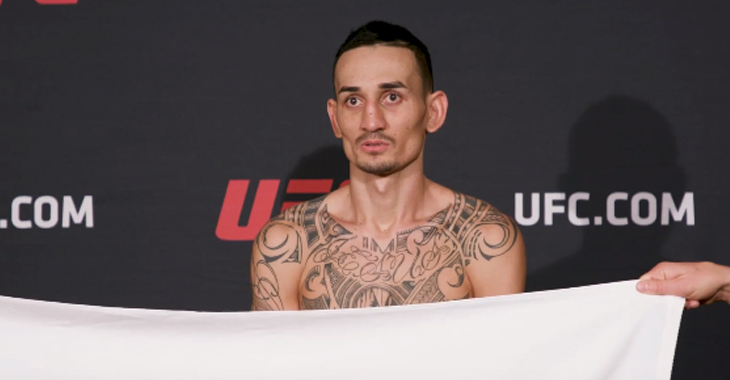 Max Holloway’s choice to act as Tony Ferguson’s understudy and fight Khabib Nurmagomedov on just six days notice was met with immediate praise and excitement. Yet there is a darker side to Holloway’s accepting this short-notice fight.

Even though he’s the champion of the 145-pound featherweight division, and will be afforded an extra 10 pounds to work with in this 155-pound title fight, Holloway will have to endure a massive and potentially hazardous weight cut for this bout with Nurmagomedov. In fact, his nutritionist George Lockhart says Holloway’s cut to 155 will be the tied for biggest that he’s ever been a part of.

Lockhart detailed the massive task ahead in an interview with MMA Fighting.

“This is huge for Max and honestly this would be so easy to say, ‘No, man, he can’t do it’ and it would be no stress on me,” Lockhart said. “But the kid, I know he wants it. I know Max wants it. He’s actually excited about this shit. He has so much weight to cut, but he was excited. It was like he had a challenge. He’s just like, ‘Let’s do this’ and I’m like, ‘all right.’”

“Anybody that follows us and knows what I do, this is tied for the largest weight that I’ve ever done,” he added.

With so little time to get Holloway down to 155 pounds, Lockhart is not even worrying about Holloway’s performance on fight night. His sole priority this time around is helping the featherweight champ make the weight.

“He’s gonna have to push his body,” he continued. “But it’s gonna be low impact. It’s not like he’s gonna be sparring and grappling and stuff. His body doesn’t have the ability. That would be dangerous. So we’re doing low impact, but high volume.”

Though the challenges ahead are mountainous, Lockhart is confident Holloway will hit his mark in Brooklyn.

Do you think Max Holloway will make weight?