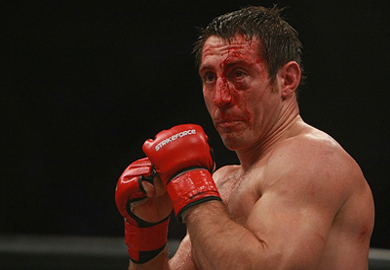 Tim Kennedy/Luke Rockhold and Nate Marquardt/Tyron Woodley will be fighting for their respective Strikeforce titles this Saturday. Usually a card like this would have the attention of mixed martial arts fan masses from around the world, but this weekend’s card seems to be a bit different.

Earlier this week Zuffa and Strikeforce held a press conference for the upcoming fights and the attendance was less than stellar. Even though all gears were turning behind the scenes and on stage, it’s what was, or was not, in front of the stage that caused discomfort for the fighters. There were allegedly no more than five reporters present covering the event.

With five UFC events taking place inside a month’s span (UFC on FX: Maynard vs. Guida, UFC 147, UFC 148, UFC on FUEL TV: Munoz vs. Weidman and UFC 149) it is easy to see why reporters are getting lost in the mix of all of these cards. For Strikeforce Middleweight title contender Tim Kennedy, it’s very frustrating.

“Take a picture. There’s not a single goddamn reporter here. There’s four of you guys. This is two title fights for Strikeforce. It’s crystal clear that nobody gives a s***. They don’t. I knock Rockhold out on Saturday night? Changes nothing for me. Nothing in, like, what media publications are going to cover me, who talks about me, sponsors I’m going to get. Do you know how much money I didn’t make in sponsors for this fight because nobody cares about Strikeforce? It’s insane.

“I’m fighting one of the best fighters on the planet. Not top 10… like top five. I’m very confident that both Luke and I would clean house all the way to the top one or two guys in the UFC that could finally give us a fight, and nobody cares. It doesn’t make any sense. Just the ignorance of the sport and the athletes, there’s no way we can change that unless you let us fight other guys outside of the organization, and that’s just not going to happen.”

Strikeforce: Rockhold vs. Kennedy takes place this Saturday in Portland, Oregon at the Rose Garden. The event will be available to watch on Showtime at 10:00 PM EST. Luke Rockhold defends his Strikeforce Middleweight Title against Tim Kennedy. Nate Marquardt and Tyron Woodley will duke it out for the vacant Strikeforce Welterweight Title.