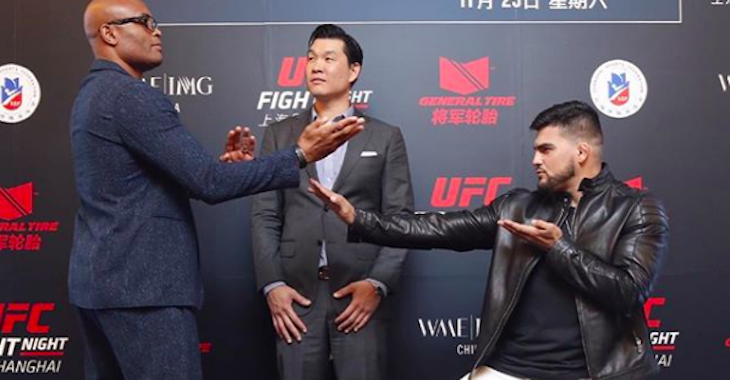 Eager to get the bad taste of his loss to Georges St-Pierre out of his mouth, Michael Bisping jumped at the chance to replace Anderson Silva’s spot against Kelvin Gastelum. He has stated that he’ll be retiring in England next year, but decided to squeeze one more in there. Despite ultimately being finished by St-Pierre, Bisping’s coach goes on record saying he think Gastelum is a tougher fight.

“Really, Kelvin [Gastelum] is, in my opinion, on the feet, a tougher fight than Georges St-Pierre. It’s not like Mike’s a guy that shoots and wrestles all the time so obviously it’s gonna be a lot of stand up fighting and this guy’s a bigger threat than I think that even Georges was. This guy’s got a different mind frame. Is it gonna hurt or help him? We’re gonna’ find out. You can look at it both ways. I’m looking that it’s a good thing that Michael wants to do. It’s something that he’s very happy about the decision that he made to do this, so we’ve got to ride that positive mind into this fight and hope for the best.”

Michael @Bisping sat down with @karynbryant to discuss his loss vs. GSP and his upcoming fight vs. @KelvinGastelum. pic.twitter.com/a8yxqmHrg7

“Mike is a world champion and he can fight any guy on the planet. Is there a question about how he’s gonna be mentally with how close this fight is? Sure, there could be. But I have a feeling Mike’s head is gonna be right in this fight and it’s something that he really wants to go out there and win and try to dust off his last loss. We’re going in. We’re gonna go in regardless of whether I have concerns or don’t have concerns. We’re gonna go in and we’re gonna go in there to win.” – Jason Parillo speaking on the Extra Rounds Podcast.

Both fighters have proportionally large stakes attached to their upcoming bout. Kelvin Gastelum will be fighting at UFC Shanghai to get ever closer to his first UFC title. Michael Bisping on the other hand, will fight for redemption. A win for Gastelum will be the biggest push his career has ever seen, which would send Bisping going into his last fight ever on two back-t0-back losses. If Bisping beats Gastelum, it might not be a huge footnote in his impressive resume, but it sets his mindset right to march into what is sure to be a huge retirement fight.