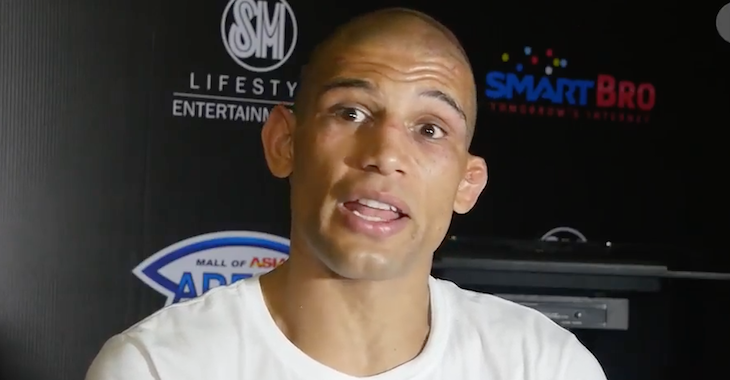 Although he was never formally ‘kicked out’ of the event, UFC officials pulled him aside after the outburst to speak to him. Johnson said this led to an extremely productive conversation with the UFC in regards to the Reebok deal, which also saw several other fighters joining in on the discussion. He spoke about the situation to BloodyElbow: “Obviously, I had grievances, and they pulled me out to talk about those grievances. It wasn’t like security grabbed me and dragged me out,” he said. “If I didn’t stand up at that point, that conference would’ve gone on for another 15 or 20 minutes, but that shut the conference right down. It was over anyway, but I was the first to leave for sure.”

Kajan Johnson made it clear in his interview that he isn’t blaming Reebok, and even went as far as to call the Reebok rep he interrupted to apologize. As a result of Johnson’s outburst, the UFC scheduled an impromptu session with the fighters to discuss the Reebok deal, as well as what could be done to rectify the situation going forward: “It was really, really productive,” Johnson said. “There were a lot of people that were speaking up. I spoke a little bit at the beginning, but I didn’t have to say very much; I just had to create that situation. And then the room just took over. There were guys like Joe Lauzon talking about numbers. Sara McMann was really vocal, giving a lot of great solutions and ideas that we can use to work around the deal that’s currently in place to put more money in fighters’ pockets.

“I don’t think it’s ever happened before that that many fighters have sat down and had an open and honest, back-and-forth conversation with high-level UFC executives outlining the problems and then trying to find solutions to those problems that work for both the company and the athletes.”