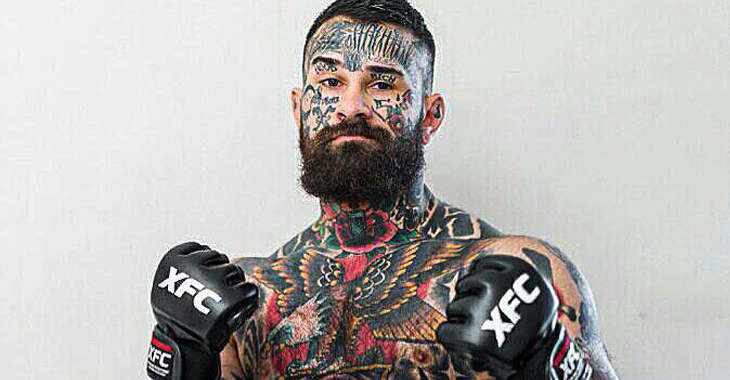 You may recognize the MMA fighter covered in tattoos from a video that went viral on the Internet. In 2014, Wallace and Ben “10” Nguyen had the infamous weigh-in staredown where “Julz the Jackal” seemingly “bullied” Nguyen only to be knocked out in the first round of their competition.

Wallace has been buzzing in media headlines after entering a guilty plea to “one count of assault occasioning actual bodily harm and one count of intentionally choking with recklessness,” which stemmed from an incident involving his ex-fiancee, Jessy-Rose “Jessy Jess” Clark, who is also an MMA fighter. Wallace was awaiting his sentencing in an Australian court that is scheduled to take place on December 7. However, police are now worried that Wallace may possibly be trying to dodge his sentencing after being notified that Wallace took off to the states, according to the Daily Telegraph.

The Daily Telegraph reported on Friday:

“Wallace’s bail was dispensed with after he pleaded guilty — despite the potential of a custodial sentence being handed down on December 7.”

The report stated that Wallace put up a post two days ago that suggested he was in Santa Ana, California.

“A police source said there were concerns about how someone facing jail time was allowed to leave the country, including having no guarantee he would return.”

The report also mentions that “Jessy Jess” told The Saturday Telegraph that she had concerns that the Australian AVO order may not hold any validity in the states, where she currently resides. Following Wallace’s guilty plea, he was cut by Australian promotion Xtreme Fighting Championship (XFC), where he had his last three professional fights.

In a Facebook post that has since been deleted, Wallace vented his side of his relationship with Clark and said that she kept the charges against him in spite of hearing about him being involved in a new love relationship.

With everything that has happened between Jessy-Rose “Jessy Jess”Clark and Julian “Julz the Jackal” Wallace, we can all hope for the best for each of them and that they both find contentment in their futures.