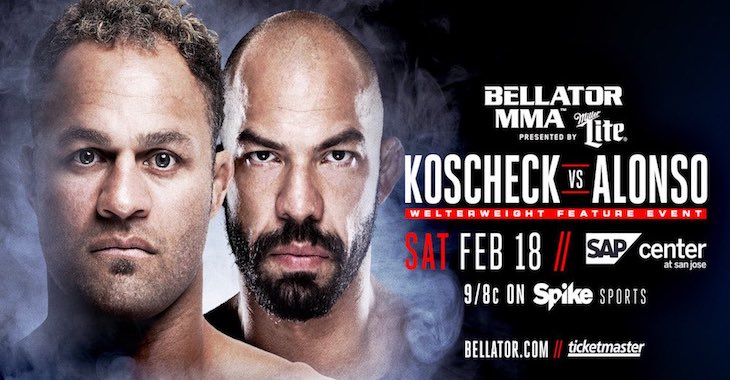 Back in June of 2015, it was announced that Ultimate Fighter season 1 veteran and former UFC welterweight title challenger Josh Koscheck had signed with Bellator MMA. Almost two years later, the veteran still hasn’t set foot in the promotion’s cage. On February 18, that will finally change.

On Tuesday afternoon, Bellator sent out a press release announcing that Koscheck will debut in their cage on the main card of Bellator 172. He’ll be making this debut against Brazil’s Mauricio Alonso.

Koscheck has not stepped onto the canvas since March 21 of 2015, when he was submitted in the first-round by hot-and-cold UFC welterweight Erick Silva. Prior to this loss, Koscheck was submitted by Jake Ellenberger, knocked out by Tyron Woodley, TKO’d by Robbie Lawler, and decisioned by Johny Hendricks.

Now on an unfortunate, five fight losing streak, and 17-10 overall, Koscheck  has competed 25 times in the UFC’s Octagon, having debuted in the organization with a 2-0 record all the way back in 2005. Over the course of his decade-long run in the UFC, he defeated names like Diego Sanchez, Chris Lytle, Frank Trigg, Anthony “Rumble” Johnson, Paul Daley, Matt Hughes, and Mike Pierce. Alonso will enter this bout on a two-fight win-streak, having recently decisioned Mike Persons and Justin Baesman on the regional circuit. His lone fight in the Bellator cage occurred in September of 2015, when he gave up a decision to Nick Pica. His overall record currently stands at 12-7.

If Koscheck is able to defeat Alonso, he’ll likely be rushed toward a rematch with Daley, who he defeated back in 2010. Shortly after this fight ended, Daley infamously punched Koscheck after the bell, which resulted in his release from the UFC. As such, the two welterweights have just the kind of beef Bellator loves to work with.

Do you think Josh Koscheck can win this Bellator debut, or is he doomed to fall onto a six fight losing streak against his relatively unknown foe? Sound off, PENN Nation!