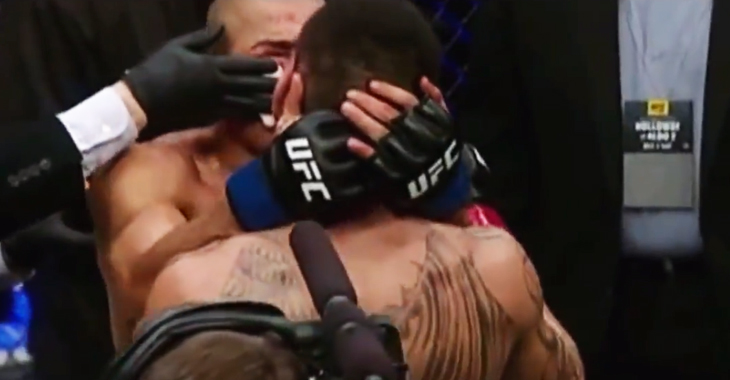 The fallout from the UFC 218 chaos is still growing as the lightweight division is shaken up by former champion Eddie Alvarez, as featherweight settles in with its new king. While Max Holloway’s last win over Jose Aldo felt like an upset, this rematch felt like a complete passing of the torch. The Hawaiian champion has been all class speaking about his victory, but there was a long moment in the Octagon that night which was really special that many missed.

“I heard his motivation for this fight with Jose Aldo, and his motivation was cause of his daughter and you know, I get it. I’m a parent just like him and I respect that. That guy’s a GOAT. He shouldn’t be feeling like he owes anybody anything. In Brazil — in the favelas — the whole Brazil should celebrate him and they should start making statues of the guy.”

“The guy’s a legend, he’s a GOAT and you gotta’ respect it.They keep telling me I beat him. I like to say I’m jokin’ around over here, ‘I beat him back-to-back,’ but at the end of the day, he’s still the GOAT. I got numbers to catch. He’s got a defense number. I want to beat, I want to beat that defense number then we can start talking about me being the greatest.” — Max Holloway speaking to Megan Olivi after UFC 218.

Even while the medical officials are still attending to Jose Aldo, Max Holloway walks over and pays his respects to the man who literally made the division. He helps him off the stool and the two embrace multiple times, exchanging words with each other. Finally, Holloway raises the former king’s arm and Aldo kisses him on the head, almost blessing the Holloway’s new reign. It was a very special interaction after a great fight that just solidifies the type of person Max Holloway is and the champion he has become.