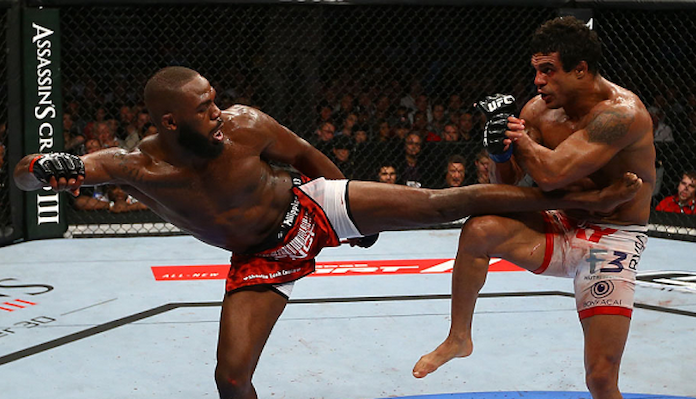 Last weekend, on the main card of UFC 224, Vitor Belfort stepped into the UFC’s Octagon for what’s believed to be the last time. Unfortunately, his retirement fight didn’t go the way he planned, as he was put down by a second-round crane kick from his opponent Lyoto Machida.

Despite this unfortunate twist, Belfort’s retirement fight generated a tidal wave of support, respect and congratulations from his fans and peers. One of the latest members of the MMA community to send a message of respect to the retiring Vitor Belfort is his former opponent, former UFC light heavyweight champ Jon Jones.

Jones and Belfort fought at UFC 152, back in 2012. Though Jones would win their fight via fourth-round submission, Belfort would go down as one of the first fighters to give the former UFC light heavyweight champ a real scare, as he threatened with a deep armbar early in the fight.

Jones posted his message to Belfort on Instagram on Monday night, explaining that he learned a lot in their fight, and adding that he’d be willing to battle Belfort in a charity BJJ match in the future.

“Enjoy your retirement brother, you deserve it,” Jones said in his message to Belfort. “Thank you for the magnificent fight, learned a lot about myself that night. Nothing but respect for you [Vitor Belfort]. PS, I know my arm would have been a nice little trophy for you, maybe we can run it back sometime in the future. Charity jujitsu match or something.”

While Belfort has assured his career in the Octagon is over, there has been rampant speculation that he might take his fistic services elsewhere in the future — perhaps to Rizin or Bellator.

Whatever the case, Belfort’s career stands out as a truly legendary one. Under the UFC, PRIDE, Affliction and Strikeforce banners, he’s thrived at middleweight, light heavyweight and heavyweight, defeating top-flight foes like Wanderlei Silva, Heath Herring, Randy Couture, Rich Franklin, Yoshihiro Akiyama, Anthony “Rumble” Johnson, Michael Bisping, Luke Rockhold, Dan Henderson and Nate Marquardt. At the time of his ostensible retirement, he owns an overall record of 26-14 (1). Really, it’s no surprise the Brazilian legend commands such respect among his peers.