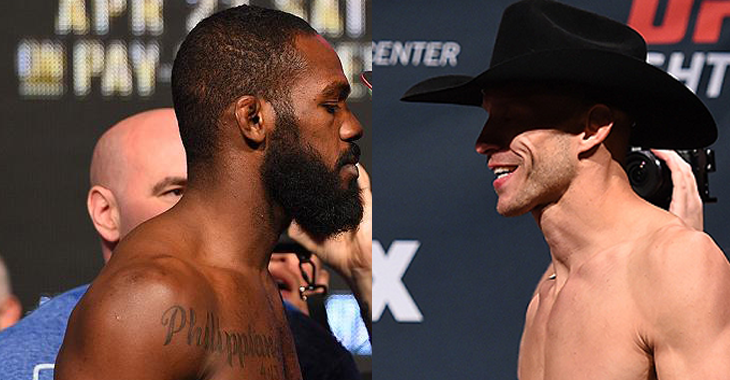 An incident nearly came to blows amongst JacksonWink MMA teammates, Donald Cerrone and Jon Jones a while back, according to “Cowboy.”

Cerrone was a guest on the recent episode of “The Fighter and the Kid” podcast and recalled a time that he mentioned Jones’ past party animal side he had to him to the media, which the former UFC champ did not appreciate at the time.

“Me and him have plenty of disputes all the time. We almost had at it, him and I at Jackson’s,” Cerrone said (transcribed by Fox Sports). “This is before all the wild Jon (stuff) came out and I spoke about him being wild and he was like ‘what the (expletive) with you putting me out like that?’ and I was like ‘what’s up mother (expletive)?’ but that’s behind the scenes.

“What had happened was all the UFC cameras were there that day and I came at Jon like ‘what’s up?’ and he comes at me, puts his God hat on and got to work. He just said ‘Cowboy, I just don’t understand, I’m so nice to you, always try to help you and this is how you treat me, this is how you want to come at me? I remember pointing at him like ‘you mother (expletive)’.”

Cerrone said that they both cooled off after the incident and since then have become better friends.

“Jon and I are cool now. We hang out and we’re over all that,” Cerrone said.