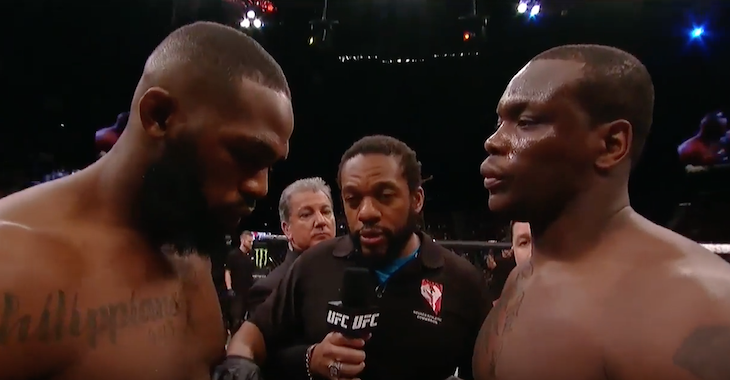 On July 29, in the main event of UFC 214, former light heavyweight champion Jon Jones will return from a lengthy layoff to challenge reigning champion Daniel Cormier for the title.

In April of 2016, Jones returned from a similar layoff. Though he was originally expected to challenge Cormier for gold in this 2016 return to action, a last-minute Cormier injury meant he instead battled late-replacement Ovince St. Preux for interim gold.

Though Jones won this fight with St. Preux, his performance that night goes down as one of the least impressive of his legendary career. Speaking on The Herd with Colin Cowherd, Jones’ rival Daniel Cormier explained that he thinks he knows the reason for Jones’ tepid performance that night.

“You hear guys like Alexander Gustafsson now saying he believes Jon was enhanced throughout his career,” Cormier said (h/t BloodyElbow.com). “But before, we had no sanctioning body like USADA. USADA, now, is on top of all that.”

“I do believe that we will see a different fighter in Anaheim, because I do believe he has to be clean this time. Otherwise, he’ll be caught. And that’s why he got caught last time. I think he fought Ovince Saint Preux clean, and didn’t like the way he felt, and tried to do something again dirty, and got caught at UFC 200.”

These comments from Cormier, of course, are just conjecture, and the latest chapter in his fiery war of words with Jones.

Who do you think comes out on top when Daniel Cormier and Jon Jones rematch for light heavyweight gold at UFC 214 this July 29?