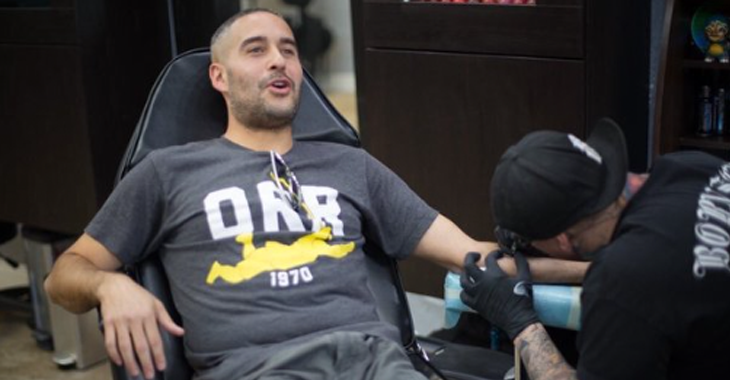 Prior to UFC 196, where Nate Diaz ended the undefeated streak of Conor McGregor, UFC commentator Jon Anik promised his podcast listeners that he would get a ‘209’ tattoo in honor of Nate Diaz if he defeated McGregor.

After Diaz’s win, Anik made good on his promise to get ‘209’ tattooed on his body permanently. Now, two weeks removed from UFC 196, Anik reflected on the decision during an interview with MMAJunkie Radio:

“Two weeks ago I had a real hard time (getting into clubs),” Anik joked. “Now that I’ve got this 209 tattoo I can get in anywhere.”

“I still think I’ve got to be careful going anywhere near Stockton, Calif., at least for a couple more weeks,” Anik said. “There’s a lot of people in that 209 who the last people they want is me repping them. Obviously, it was a bit of a crazy situation in and around UFC 196. But it was nice to see some of the Skrap Pack in Brisbane, Australia. Leslie Smith, of course, got the win and her team wanted a picture with the 209. So, we’ve had fun with it. Ultimately, at the root of it, this was just a fun bit

“Ultimately, at the root of it, this was just a fun bit for our podcast and a potential way for me to honor guys who have been at or near the top of my list of favorite fighters for years. I have loved Nick Diaz since I started watching MMA. That was part of the impetus behind the tattoo bet, that if Conor McGregor did lose, I’d have no problem branding myself forever with that 209. So, it’s been a little bit crazy at times, certainly for my wife. But all is well that ends well.”