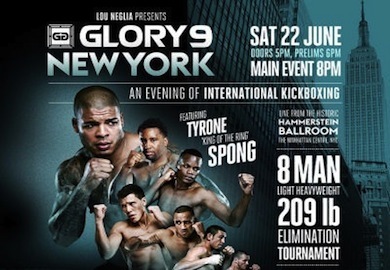 This is the official BJPENN.com page for Glory 9: NYC results for tonight’s 8-man slam tournament. This results are abbreviated versions of fight recaps and are made to be easily digested.

There will be a winner crowned tonight as well so stay tuned to this page as the night goes on to catch up-to-the-minute results of the entire tournament.

There are also two reserve bouts for the tournament, whose results will be archived here.

Both men wanted a spot in the light-heavyweight tournament as hey both had a sense of urgency from the start. Blake was the aggressor with a sharp counter for the duration of the fight and kept Koichi unable to establish effective offense. Blake threw both the technical and the flashy as he fought on to a decision win.

Vakhitov controlled this short bout as he came straight forward. He first dropped Tavares with a spinning backfist and then a horrific liver shot upon the reset.

Official Decision: Artem Vakhitov defeats Luis Tavares via Knockout at 1:06 of Round 1

Silva came out with a larger gas tank in this round as he actively sought to deplete Sam’s. Silva stayed active, stepped to the outside, and worked combinations diligently to take a hard fought, yet clear-cut decision from Sam.

Heart defined this bout as both men left the ground on numerous occasions as they threw everything in the book. A mirror-image bout that ended in a razor-thin unanimous decision. Both saw their share of wobbly knees and leather to the face in a great start to the light-heavyweight tournament.

The grit of Jacoby was just a bit too much for Collette who couldn’t answer late and let a decision slip through his hands. Jacoby’s win is his fourth and earns him a spot in the semi-finals against Danyo Ilunga.

Another razor-thin fight on a great card. Both men layed it all on the line while Verlinden did just a little more. To the boos of the crowd, Verlinden was announced the winner by decision.

Not much to say about this one. Duut dropped Spong, and payed the price for dropping Spong. Spong got up quickly and clubbed a charging Duut in the face. Duut went down and couldn’t answert he ten count.

Official Decision: Tyrone Spong defeats Michael Duut via Knockout at :31 of Round 1.

Leg kicks and fatigue won this bout for Valtelini. After a tough two rounds that went back and forth, Valtelini finished the fight in the third with nasty leg kicks that injured Ambang.

It began and at :49 seconds of round 1, it was over. Daniel Ghita came, he swarmed, and floored Guidon with a left hook from hell.

Official Decision: Daniel Ghita defeats Brice Guidon via Knockout at :49 of Round 1

In a bout that made me tired just from watching, the two light-heavyweight semi-finalists fought to a close but concise Unanimous Decision. Both looked exhausted and will need rest to fight in one more bout for the finals.

A fresh Tyrone Spong came out and peppered an exhausted Filip Verlinden. Spong had only fought for 30-seconds before this bout and is now head to the finals after a one-sided decision win over Verlinden.

A superior striker in Wayne Barrett brought the house down on Mike Lemaire. Dropped in the first, then twice in the second, Lemaire had nothing left to offer and forced the referee to call the fight in the second round.

Official Decision: Wayne Barrett defeats Mike Lemaire via Knockout at 1:12 of Round 2

Verhoeven was the faster man in this bout and had the larger gas tank. Zimmerman’s stamina waned late in the fight as he dropped a majority decision.

This one only lasted 16-seconds as a visibly staggered Danyo Ilunga showed a severe lack of coherence, forcing the referee to wave off the fight early on in the first, crowning the Glory 9 light-heavyweight champion, Tyrone Spong.

Official Decision: Tyrone Spong defeats Danyo Ilunga via (T)KO at :16 of Round 1