CamSoda are making their second foray into the world of MMA. The adult streaming platform will be teaming up with Full Metal Dojo in Thailand for FMD 19: ‘FIGHT CIRCUS’.

The event will be live on CamSoda.com on August 22.

It was a night that featured several weird and wonderful side notes, such as the ability for fans to tip fighters mid-fight.

“You will be getting a bonus. And your top tipper is……IHaveHugeTitties.”

The tipping, among others things, is a feature that FMD CEO Jon Nutt is excited to implement.

“In the future we will have comedians and live bands be included with our Circus Shows,” he said. “Not to mention live tipping for the fighters, cast, and crew. Imagine being able to tip through the screen to have the ring girl break into a split between rounds. Imagine being able to tip a fighter if he or she performs a spinning back elbow and lands it. It’s about to get wild as a secret Island off the coast of Thailand. Snakes and scorpions type of wild.”

The Fight Circus card will be headlined by former WBC Muay Thai Super Heavyweight champion Steve “Panda” Banks as he takes on Tiger Muay Thai’s Sam Cassidy for the Super Heavyweight World Championship under Trinity rules. That means the first round is boxing, second round Muay Thai and third round MMA. 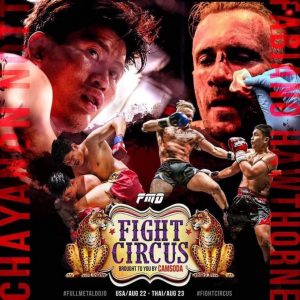 A former stomping ground (pun intended) for fighters like Amir Aliakbari, Cole Smith and Tommy Hayden, Full Metal Dojo has a reputation for putting on wild shows in Bangkok. They’re famed for their pageantry, lively ring girls and cinematic themes. Nutt is very much the ringmaster, and prone to opening the shows with his own renditions of everything from Metallica to the Thai national anthem. He even stepped in to compete when a fighter dropped out last minute.

With FMD19: FIGHT CIRCUS he’s assembled a card that is outlandish to say the least.

“I think that FMD as always been at the forefront of creativity in combat sports and we definitely are the ones putting the fun back into fighting,” he said. “For folks in America who really used to be passionate about Asian MMA? Here is a chance to get your heart pumping again. With Circus Fights vol 1. It’s gonna be epic. 2x2vs1 match ups. Loads of openweight match-ups. WLC rules match ups with contracts on the line. Plus a puper heavyweight trinity rules bout which has WBC Muay Thai Champ Panda Banks in the limelight. You can’t get more weird than this one unless you’re Luke Welling in Marblehead Neck in the Summer. That’s a private joke! As this is a Private Party. On a Private Island. With crazy real deal fights on it.”

MMA huh? The gift that keeps on giving.