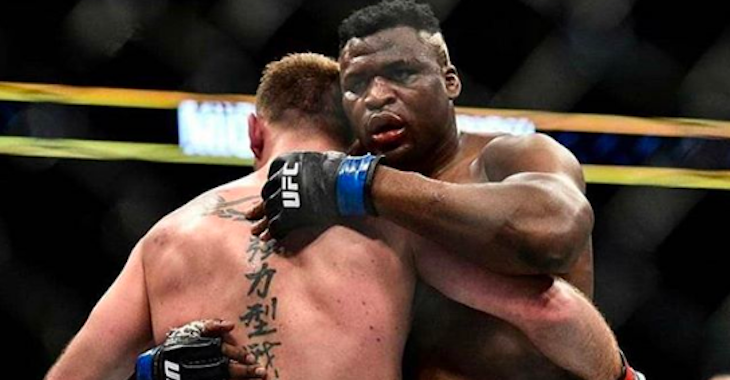 Last night, in the main event of UFC 220, hulking French-Cameroonian knockout artist Francis Ngannou lumbered into the cage with the goal of defeating Stipe Miocic and winning the UFC heavyweight title. In the end, however, the massively hyped Ngannou was outclassed by the champion, whose cardio and wrestling were simply too much to deal with.

Now, it’s back to the drawing board for the undeniably talented Ngannou. Though he certainly has some holes in his game that need filling, it seems he’s keen to learn from this loss, and use it as fuel for his continued evolution.

Ngannou asserted as much in a quick, post-fight statement on Twitter.

“Unfortunately it didn’t go on my way last night but I learned some different aspects of this sport and I’ll come back stronger,” Ngannou said in his post. “TRUST ME”

Prior to his loss to Stipe Miocic, Francis Ngannou went 6-0 in his first six bouts in the Octagon, dominating Luis Henrique, Curtis Blaydes, Bojan Mihajlović, Anthony Hamilton, Andrei Arlovski, and most impressively, Alistair Overeem, who he beheaded with a first-round punch in late 2017. He’s 11-2 overall

Miocic, meanwhile, now holds the record for the most consecutive title defenses by a UFC heavyweight champion, at three. After winning the belt with a first-round knockout of Fabricio Werdum, he’s defended it with first-round knockouts of Alistair Overeem, Junior dos Santos, and now, a decision win over Ngannou. He’s 18-2 in sum.

What do you think comes next for Stipe Miocic and Francis Ngannou? Do you expect them to rematch in the future? Join the conversation in the comments section!