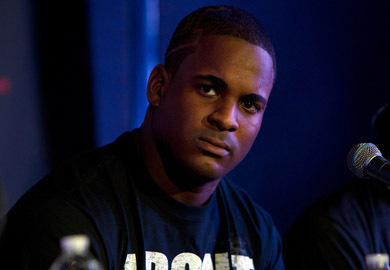 “If you receive a bout agreement and can’t fight you should say something right away. He’s putting a lot of pressure on matchmakers because they’re trying to put on this final card. What are you doing to Zuffa when you’re pulling out and they’re spending weeks on promoting the fight? Now they have to find a replacement fight and he needs to fight. When you think about it he hasn’t fought in six months. So it’s not only about fighting for a title but also from a financial stand point. It’s frustrating. You signed to fight; you signed a bout agreement so let’s fight.”

“For Luke, of course he wants to keep his title when he goes over to the UFC,” DeWitt said. “That’s going to be a bargaining chip when he restructures his contract for a UFC contract. I can see why this is a dangerous fight and obviously they don’t want to fight us.”

Luke Rockhold has only fought nine times in nearly 5 years. However he has gone on a nine-fight unbeaten streak in that time and managed to catch a Strikeforce title in the process.

While most of his time with Strikeforce has been marred with injuries, the champ has been dominant and pretty much willing to face anyone they put in front of him.

Following the announcement of his injury cancellation this past weekend the manager behind Strikeforce middleweight contender, Lorenz Larkin, told MMA Die Hard he believes Rockhold is pulling a duck job.