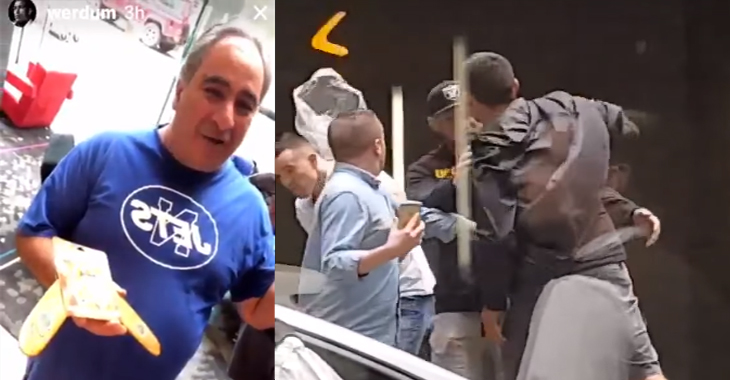 And the Boomerang Werdum used to hit Colby with was given to him by a fan pic.twitter.com/nZ8afHgHxl

While some people were already cozy in there beds last night, Fabricio Werdum and Colby Covington had a rumble Down Under. At first, it was unclear what happened and even now it’s unclear how it all started. Covington took to Instagram live directly after an alleged scuffle and was going off on a verbal tirade against Werdum, claiming that he suckerpunched him. Not too long after that, a new video before the scuffle was posted that showed Werdum pegging Covington in the face with a boomerang. As you can tell from the new clip above and Werdum’s comments below, it was actually a gift from a fan.

“No, [nothing interesting happened yesterday]. I have a good breakfast. That’s it you know. I don’t like the guy. He said bad things. Colby [Covington] seen me in the lobby. I never see him before. He said, ‘Brazilian animals.’ I say, what? I slap his phone and he drop his phone. He kick me in my leg. Good kick, but I block his kick. After that, that’s it. I had a fan give me a boomerang. I just throw it, that’s it. The boomerang is from here. I thought if I drop the boomerang, it’d come back to me, but no. Yes man, [fighters can’t just say whatever they want to say]. I don’t like when the guy says this. When you’re 250lbs, you don’t say nothing about other guys. The guys say a lot of things to me that’s not true. He don’t respect Brazil the last fight. He say a lot of bad things, this is not good. The guy say a lot of bad things. I just say man, ‘Here, with me, it’s different.'” — Fabricio Werdum speaking to Submission Radio.

Fabricio Werdum was mostly laughs about the situation, joking with the media about it all. However, Covington isn’t smiling. The latest news to come out of all this is that Covington will be pressing charges against Werdum. We’ve seen a similar situation with fighters pressing charges against others after a physical altercation, but nothing has come of it yet. This definitely isn’t the end of this ordeal and we’ll keep you updated as more unfolds.