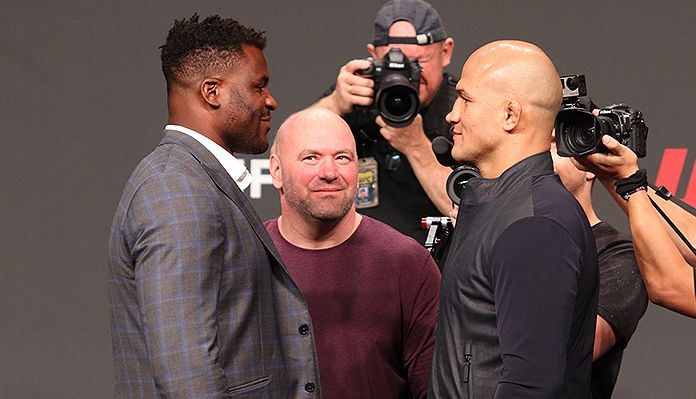 The Octagon returns to Minnesota this Saturday for UFC Minneapolis. In the main event of the card, Francis Ngannou is taking on Junior dos Santos in a pivotal heavyweight clash.

Ahead of the fight, BJPENN.com reached out to several pro fighters to get their predictions for the fight. In this case, a few believe Ngannou will be able to knock out dos Santos, while the rest think the Brazilian will use his wrestling and experience to win this fight.

Cody Stamann, UFC bantamweight: Talk about two guys who put each other out in half a second. History has shown that if Ngannou doesn’t get the person out in the first round he runs out of gas and loses. I think dos Santos can stay safe and really know where he is supposed to be. I think dos Santos beats him.

Allen Crowder, UFC heavyweight: Francis has some huge power but JDS is really good. I think dos Santos gets it done, and his experience plays a factor.

Eryk Anders, UFC light heavyweight: That is a tough one. JDS will use his footwork and touch him up. But, it is hard because Ngannou just needs one and Junior has been knocked out before. I think Francis lands that big shot and knocks him out.

Drew Dober, UFC lightweight: I believe dos Santos will get the decision win. Dos Santos will be able to avoid the power and use his wrestling.

Alonzo Menifield, UFC light heavyweight: That is a tough one. Francis is a hard hitter but JDS has the wrestling. It is a super close fight but I think Ngannou gets it done.

Jared Gordon, UFC lightweight: Francis will no doubt want to keep it standing, and I think JDS will unless he uses his wrestling. I mean, Junior dos Santos is the more well-rounded fighter and it is a coin toss but I guess I got JDS.

Andre Ewell, UFC bantamweight: That is going to be a good one. I got dos Santos, he has been on a roll. People always count him out and he gets it done.

Who do you think wins the fight between Francis Ngannou and Junior dos Santos? Let us know in the comment section!