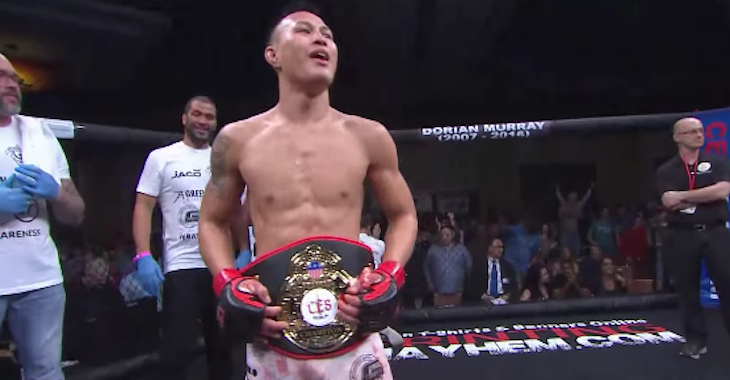 This weekend, the UFC will return to glimmering Las Vegas, Nevada with UFC 209. The card is stacked to the rim with top UFC talent, featuring names like Tyron Woodley, Stephen Thompson, Khabib Nurmagomedov, Tony Ferguson, Alistair Overeem and Mark Hunt. Long before any of these established superstars step into the cage, however, Rhode Island’s Andre Soukhamthath will make his UFC debut against Albert Morales.

The former CES bantamweight champion, Soukhamthath has done much of his recent training with the Blackzilians in South Florida. Regrettably, the Blackzilians camp has been enduring a rather public split, as inner conflict has caused the team to splinter.

During an appearance on Wednesday’s episode of BJ Penn Radio, Soukhamthath explained to host Kinch that the once great Blackzilians team has essentially split into two halves.

“The team kind of split,” he said. “Just think about one coach going this way, and another coach going that way. The fighters are just following whichever coach they want to follow. What can I say, Tyrone [Spong] is teaching at another gym, but I’m not at that gym. There’s a gym in Pompano [Beach] called CSMMA where half of the team is, and there’s another gym in Lantana, Florida which is like 45 minutes up [Highway] 95, called Combat Club. That’s where Henri Hooft and my wrestling coach Greg [Jones] are.”

Soukhamthath then explained that he’s not sure what kind of drama initiated the split, but that he chose to stay out of it, and opted to train at Combat Club simply because it’s closer to his home.

“I don’t really know how it all happened, I sort of stay out of the politics,” he said. “Like I said I just show up, I train, I write my check after the fight and that’s it. But I decided to stay with the Combat Club because it’s only five minutes down the street from my house. That’s number one, it’s really convenient for me. And, I did a lot of training with Henri Hooft and Greg, and a lot of my old training partners, they’re training there too. So it just made sense to stay there rather than drive an hour out of my day to go get training.”

Will you be watching Andre Soukhamthath make his UFC debut at UFC 209? Sound off, PENN Nation!