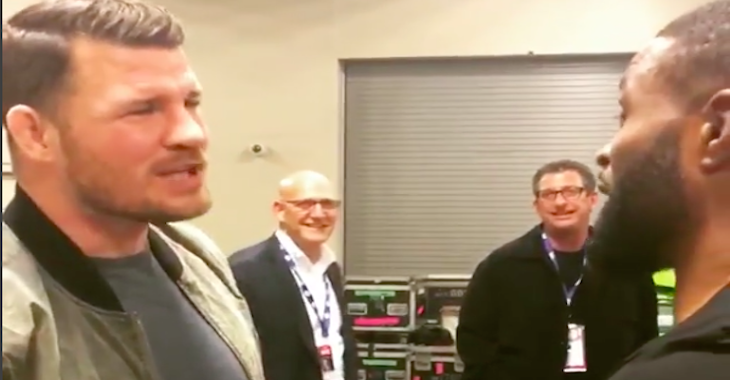 Not all that long ago, UFC welterweight champion Tyron Woodley and UFC middleweight champion Michael Bisping agreed to a catchweight superfight. Despite their clear interest in fighting one another, however, the fight never came to fruition. Instead, Woodley now appears to be closing in on a title defense opposite Demian Maia, while Bisping is currently nursing an injury, and is expected to return against the winner of Yoel Romero and Robert Whittaker’s interim middleweight title fight.

While this catchweight superfight has been relegated to the back burner for now, it is one that still interests Woodley, and one that surely still interests Bisping. And though they have swapped some trash talk in the past, their mutual interest in this fight is not borne of bad blood. In fact, Woodley actually has a good deal of respect for the middleweight champ.

Woodley explained why he respects Bisping a recent interview with BJPenn.com’s Chris Taylor.

“I saw Bisping yesterday, and man, I can respect him,” he said. “Him and I, we got the same damn build. I’m gonna work. I’m gonna take the fight that makes the most sense, the biggest fight that I can do, I’m gonna knock out all the competition, I’m gonna do movies in between, I’m gonna do UFC on Fox, I’m gonna open up a UFC Gym. This dude is a hustler, man. He’s non-stop. He’s out there working, he’s out there grinding. I respect that.”

Do you think Tyron Woodley and Michael Bisping will ever fight?