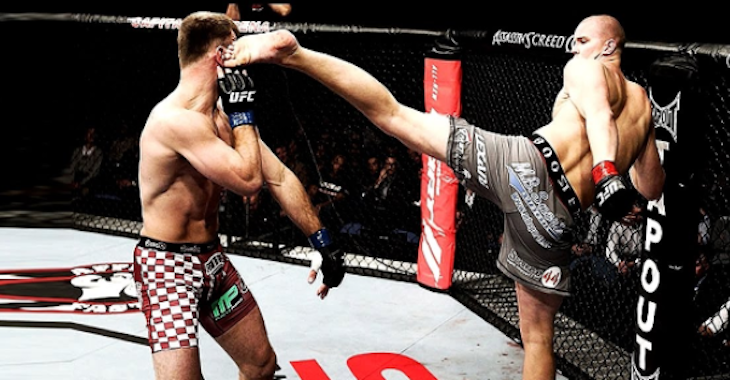 Stipe Miocic has established himself as one of the most fearsome and dominating heavyweight champions in UFC history. We have, however, seen him lose in the past. His most recent loss – which he just avenged with a first-round knockout – was a close decision defeat at the hands of Junior Dos Santos. His next most recent hiccup occurred in 2012, when he wilted under a storm of second-round punches dealt by towering Dutchman Stefan Struve.

On the latest episode of BJ Penn Radio, Struve weighed in on a potential rematch with Miocic – which could well happen, so long as Struve wins his September 2, UFC Fight Night 115 headlining showdown with Alexander Volkov.

While Struve is confident in his chances against Miocic, he acknowledged that both he and the Croatian-American champ have changed quite a bit since their initial scrap.

“He really realizes now what he can do in there,” he said. “He’s really learning a lot too, because he didn’t have a ton of fights at the moment we fought. But he’s still the same guy, you know? He’s still the same fighter, simple, but he got a lot better. I didn’t kick as much then as I do now. I use my kicks a lot more now to keep distance. My stance has completely changed, especially since coming over here to Florida to train with Henri Hooft and Greg Jones.”

Though Stefan Struve understands that a possible rematch with Stipe Miocic could be a very different fight, he is still confident that he has the skills to win it.

“I just think, when I look at the rankings, and I look at all the guys, ahead of me and below Stipe, I am one of the hardest matchups for him. I believe that with my skillset, I will give him the toughest challenge in the division. That’s really how I feel.” That said, Struve doesn’t believe many other UFC heavies stand a chance against the champ.

“I just don’t see a lot of people beating him, to be honest, but I really truly believe that I’ve got the skillset to do it,” he said. “I think I can stop his takedowns with all the work I’ve put in over here in South Florida, and I believe that when we’re on our feet, he’s got a very powerful punch, but I believe – and I showed him that the first fight – that I can deal with that. It was an all-out war, but since I’ve been using my reach more and more, I really believe that if I fight smart, and just keep my distance, and throw my kicks, then I see myself winning that fight.”

No matter the outcome of a possible rematch with Miocic, Struve admitted that he has a tremendous amount of respect for the champ.

“This division has changed, and a lot of people aren’t performing the way the used to perform. I truly believe that he’s clean – that he’s been clean his entire career. He’s a great athlete, and he’s a great human being too. The UFC should be proud to have a champion like him. I wish him all the best too, he’s a great guy.”

Are you interested in seeing a Stefan Struve vs. Stipe Miocic rematch down the road? How do you think Struve will do against the dangerous Alexander Volkov at UFC Fight Night 116?