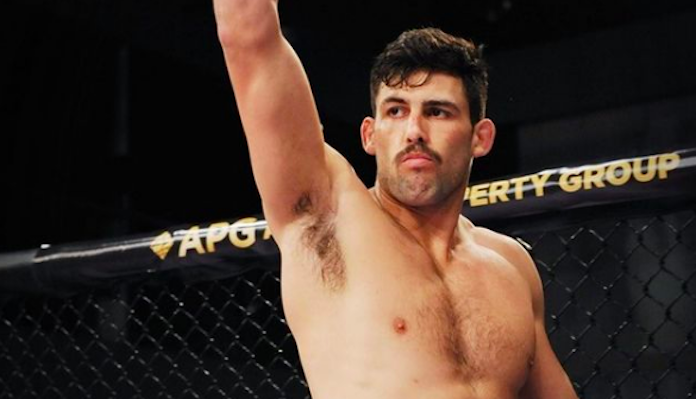 Former UFC middleweight Rob Wilkinson, who now competes at light heavyweight, has not had an easy time finding fights since his time with the Las Vegas-based promotion came to an end.

Wilkinson, a 28-year-old native of Hobart, Australia, was a member of the UFC roster in 2017 and 2018. While he lost both of his fights in that stretch, those defeats came against high-level foes in Siyar Bahadurzada and Israel Adesanya, and remain the only setbacks of his 12-2 professional career to date.

As such, many fans felt that his release from the promotion was somewhat premature.

Wilkinson himself, unsurprisingly, shares that opinion.

“I kind of understand that they do release fighters after two losses, but then again, I had a four-fight contract and there’s a number of fighters that have lost their first two fights that have stayed on,” Wilkinson told BJPENN.com from his home in Tasmania. “I think [Rafael dos Anjos] actually lost his first two fights and then obviously went on to be world champion. So I think it was a bit unfair.”

While UFC veterans often have an easy time finding fights due to the notoriety they gained by competing in the Octagon, this has not been the case for Wilkinson. The Australian has competed just once in MMA since his UFC release, defeating fellow UFC veteran Dylan Andrews by submission in December, 2019. Although he has also won a handful of kickboxing bouts since his exit from the UFC, he’s been far less active than he would have liked. That’s partly due to the fact that the coronavirus pandemic has made international travel extremely difficult, and partially because nobody on Australian soil seems to want to fight him.

“I’ve been trying to be very active, which I have not been,” a frustrated Wilkinson said. “I wanted to fight maybe four times this year, because I wasn’t injured, but obviously COVID has kind of prevented me fighting overseas.

“Then I’ve been trying to fight in local shows, because they’ve come back now—especially at towards the end of this year, but I can’t get matched with anyone,” he added. “Every time I contact a promoter or my manager contacts a promoter, the feedback is that no one wants to fight me.

“I guess these guys are trying to get to the UFC and don’t want to take hard flights.”

Despite the difficulty Wilkinson has had finding fights, there is some hope on the horizon. His manager has recently been in contact with Bellator, one of the biggest MMA promotions in the world. The Viacom-owned organization has expressed interest in signing Wilkinson in the future, though negotiations have slowed due to the travel restrictions associated with the pandemic.

“My manager was talking with Bellator just before it all hit and everything got canceled,” Wilkinson said. “I thought I was going to get on a card over there, but now everything’s obviously slowed down and Australia’s shut its borders, so just flying out of Australia is a bit of a hassle.

“My manager has been talking to them and they sound like they are interested, but it’s difficult at the moment with COVID and everything going on.”

While it doesn’t look like Wilkinson will ink a deal with Bellator particularly imminently, he’s still hoping it’s possible, and believes he could conquer the promotion’s light heavyweight division.

“That’s one of my goals, to fight [for Bellator] and become the champion,” Wilkinson said. “I see myself going pretty quickly to the top of that division. Actually, I would love to get a fight, or maybe four fights there, if it it’s possible next year. Then in 2022, I can see myself becoming the champion of the division.”

The Bellator light heavyweight division is currently ruled by the fearsome Vadim Nemkov, and populated by contenders like Ryan Bader, Corey Anderson, Phil Davis and Lyoto Machida. Wilkinson, who has been training extensively with his former foil Adesanya in New Zealand, is confident he can beat any of those men when the chips are down.

“I feel I can compete with the top-10 in Bellator or the UFC,” Wilkinson said. “I’ve got a lot of confidence after going down and training at City Kickboxing with Israel and all those guys. I was actually there at the start of this year as well.

“I know where I am, and I’ve improved since I was in the UFC,” he added. “I was only 25 when I had those two fights. I’m 28 now, and I finally feel like I’m going into my best years. The next five, six years will be the best years, and I really want to make the most of them, and world championships have always been the goal since I started.”

While Wilkinson is currently hoping for a move to the Bellator MMA cage, he’s also open to a return to the UFC’s Octagon in the future. The immediate priority, however, is simply finding a fight, and he’s hopeful that an opportunistic promotion will recognize his worth and give him the chance.

“I’d take a fight pretty much anywhere,” he said. “I’d be keen to go to Japan and fight in Rizin.

“I’m not going to turn down a fight at this stage, when it’s been over a year,” he added. “I’d love to be fighting regularly.

“Look at my record,” he concluded. “I’m 12-2. My fight against Israel—especially that first round—that was probably one of the best first rounds against Israel. I’m only 28, I’m young, and I’m hungry and I’m ready to go.”

Where would you like to see Rob Wilkinson fight next?