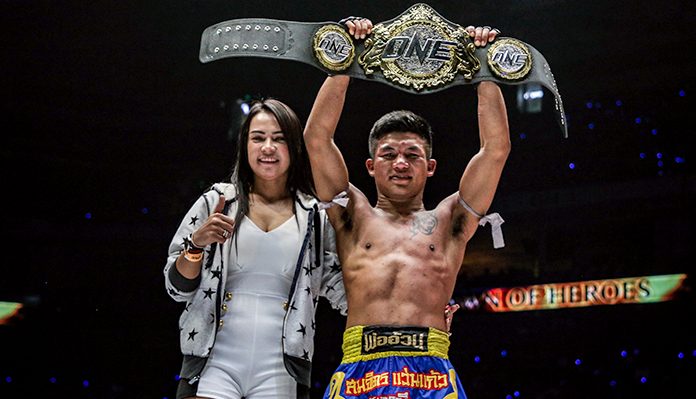 ONE flyweight Muay Thai titleholder Rodtang Jitmuangnon, widely regarded as one of the most exciting fighters in combat sports, is interested in trying his hand at MMA in the future.

The 22-year-old Thai, who has also captured the Max Muay Thai 126-pound title and the Omnoi Stadium 130-pound title, is drawing inspiration from his girlfriend, Stamp Fairtex.

Stamp is currently the ONE atomweight Muay Thai queen champ, and previously held the promotion’s atomweight kickboxing title. In addition to her accomplishments in the striking realm, she’s also 4-0 in mixed martial arts.

Having witnessed his girlfriend’s success in MMA, Rodtang has been considering making the move himself, and has even started doing a bit of jiu jitsu to widen his martial arts arsenal.

“I’ll still compete in Muay Thai, but I feel that I want to try MMA,” Rodtang told BJPENN.com. “Stamp was the one that invited me to try at the beginning.”

While Rodtang is keen to compete in MMA in the future, he recognizes that he needs more practice before he partakes in an MMA contest.

“I really have no idea [when I will compete in an MMA bout] yet,” he said. “I can only say I’ll need more time to learn as I’ve spent my whole life striking.”

At present, Rodtang is focused on defending his ONE Muay Thai title. The Thai berserker doesn’t currently have a fight booked, but is open to anything.

“Well Jonathan is one of the best foreign Nak Muay that I’ve fought with,” he said of his British rival. “He’s got all skills and I don’t mind to rematch with him.”

Rodtang is also interested in a future rematch with kickboxing wunderkind Tenshin Nasukawa. Nasukawa is not currently signed with ONE, but given that he previously handed Rodtang an incredibly close loss, the appetite for a rematch certainly exists.

“I can fight to anyone, it depends on ONE Championship to decide,” he said when asked about a rematch with Nasukawa. “I won’t choose any opponent, but I know that I always bring out the best in me.”

Whatever the future holds, Rodtang Jitmuangnon is very happy with the progress he’s made in ONE Championship so far—particularly at such a young age.

“I can’t believe I’ve come this far, from a local athlete to international one,” Rodtang said. “Now I have fans not just only in Thailand but around the world. I’m speechless. I’m really grateful. I’d like to thank ONE Championship for making my life better and my dream bigger. However, I won’t stop. I’ll keep trying to give top performances.”