Home » MMA News » Exclusive MMA Interviews » Mike Kimbel right where he wants to be as he prepa... 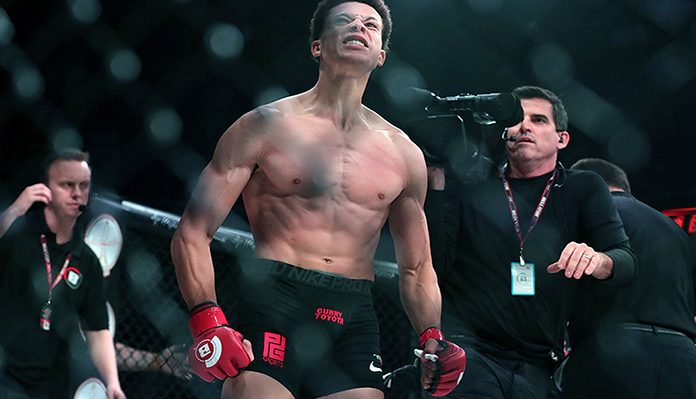 Mike Kimbel is days away from another fight with Bellator MMA, and another fight in his home state of Connecticut, as he’s set to battle Chris Disonell at Bellator 225 this Saturday.

Kimbel is currently 3-1 as a professional, with all of his fights occurring in the Bellator cage. His most recent fight was a split decision victory over Sebastian Ruiz inside New York City’s Madison Square Garden. Getting the opportunity to fight inside this world famous arena was a bucket list item for Kimbel. He’s glad to have checked it off his list, but he wasn’t happy with the split decision ruling.

While Kimbel was happy to rebound from his first pro loss, he says he was infuriated with the judges’ ruling.

“Oh I was pissed,” he told BJPenn.com. “Are they blind? You know, I think that it’s bulls*** because the judge knows he fu**ed up. But supposedly, the judges and the organization were saying that judge mixed up the card, like he had the blue corner for the red corner type thing. If that’s the case, okay understandable, unanimous decision all the way across the board. I don’t know man, that must be what it was. That’s what they told me. Decision nonetheless though.”

With some frustration angled toward the decision ruling, Kimbel also had some frustration with himself and other variables in the fight against Ruiz, because as he says, getting a finish is the goal every time.

“100%, I feel like there are a couple variables to that fight,” he said. “One, [Ruiz] was way more durable and tougher than anyone expected. He’s a tough dude. From going in and watching his fights, he comes to fight. To see him not fighting and being very hesitant against me, it took me by surprise. I feel like I fought a fight I had to fight in order to win.”

In an effort to get the most out of his training camp and himself, Mike Kimbel has moved down to Florida and now trains with head coach Henri Hooft and his team down at HardKnocks 365, but Bellator 225 will be the first time that Hooft will actually be in the corner for Kimbel.

“This will be the first time that Henri is in my corner officially, but as a team this is the second time, and it’ll be every time moving forward. Not for nothing, I fought like 6 weeks ago, I never really left camp. I’m excited though, my life is a weird dream. Henri’s mind and all the coaches at HardKnocks, it’s unbelievable, they’re so intelligent, they’re so real, they’re so honest. I’m just looking forward to making history and just going out there and delivering.

“I truly feel no matter what, whether I got f**king cracked and dropped and it’s looking bad in the fight, I truly feel invincible with those guys on my side.”

Returning to his home state of Connecticut for his upcoming fight against Chris Disonell, Kimbel attributes his renewed focus as to why he feels right where he belongs heading into his next fight.

“Like I said before, I’m doing it for me,” he said. “Because, I always believed in me, I know I could knock these people out. I know I’m the most immaculate fighter in the game, I know I’m pretty, I know I work out harder than these people. I know what I put into this. Those first two victories showed exactly how hard I’ve been working.”

Never one to shy away from his self-belief or confidence, Kimbel said in his only loss, which came against John Douma, he tried to be more reserved because whispers from the MMA community got into his head.

“The fight with the man I lost to, I hear around the community that I’m cocky, I’m an a**hole, and it bothered my heart a little,” he admitted. “Like why did they think this? I’m not that guy. So I made it a point to be a little bit more reserved, be a little bit more respectful, be a little more humble, but f**k all that. I’ve got it, and if I don’t got it, prove me wrong. Even that loss, you didn’t prove that you beat me, you proved that I did something stupid and gave you the fight. How is it that the man that loses gets more clout and more notoriety than the man that beat him? That tells you a lot about the two individuals.”

Kimbel is excited for his imminent return to Connecticut. He says, no matter where his career takes him, it will always be home.

“I’ve been to London, it’s beautiful and amazing, I still want to buy a big crib in Connecticut,” he said. “Florida has some of the nicest cribs I’ve ever seen, I still want a crib in Connecticut. I love my people, I love my home. Home is just home. I get to make them believe once again, and the people who already believed, I get to keep their belief. It’s exciting. Not for nothing, Chris Disonell has been trying to get clout and attention, trying to fight me forever, so I hope he keeps that energy that he’s had online. Get in there, bump your knuckles, and let’s see who’s really got it.”

When Mike Kimbel returns home to welcome Chris Disonell into Bellator, he swears it’s nothing personal, he’s just in there to handle business.