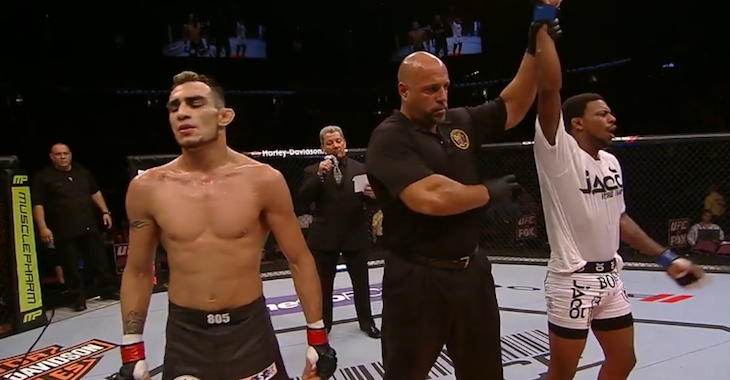 Back in May of 2012, long-time lightweight contender Michael Johnson scored an impressive decision defeat over the highly regarded Tony Ferguson. Almost five years later, when Ferguson found himself without an opponent after Khabib Nurmagomedov’s last-minute withdrawal from UFC 209, Johnson offered him a shot at revenge.

Unfortunately, Ferguson was unwilling to accept this fight with the dangerous Johnson on such short notice, and ultimately went without a fight.

On the latest episode BJ Penn Radio, Johnson weighed in on Ferguson’s refusal to take this last-minute rematch. Apparently, he attributes Ferguson’s reluctance to a lack of confidence.

“Tony’s decision is his decision,” Johnson said. “I myself wouldn’t have turned [the fight] down, especially coming from a guy that beat me already who was taking the fight on probably 10 hours notice, but that’s his decision. I guess he really didn’t have that much confidence in himself going into the fight with me. You can’t call a guy the number-one-contender if he won’t take a fight against a guy that’s already whooped him in the UFC before. Everyone’s getting their hype train around this guy, but that’s how the world works. It’s funny.”

Having had his offer to step in for Nurmagomedov rejected, Johnson says he is no longer willing to give Ferguson a rematch – though he would have to consider it if the UFC offered him the fight.

“I’m not giving Tony his rematch,” he said. “I tried giving him his chance twice and he turned it down.”

Johnson has not been seen in action since November, when he was submitted by Khabib Nurmagomedov on the undercard of a stacked UFC 205. Ferguson, meanwhile, also last fought in November, when he picked up an impressive decision win over former champion Rafael Dos Anjos.

Would you be interested in seeing Michael Johnson and Tony Ferguson fight again?