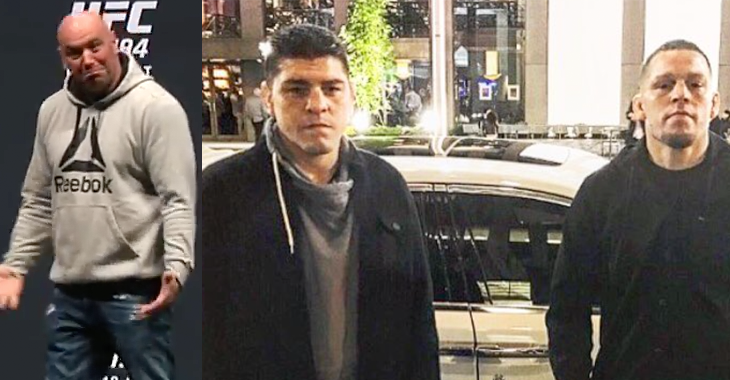 Yesterday afternoon, fan favorite lightweight Nate Diaz appeared on a special edition of The MMA Hour to give the fight community an update on the state of his career, and when he might fight again. The news was not good.

While many were expecting Diaz to announce a fight during this anticipated interview, he instead announced plans to sit out for the remainder of the year, and also suggested his brother Nick was likely to do the same.

“I’ve seen rumors about me and my brother fighting people but we haven’t done much talking,” Diaz explained on the show (via Yahoo Sports). “I think [the UFC] is trying to bring us back in but all the pressure is coming from these rumors [about who we are fighting]. I plan on sitting out this year and I’m fighting nobody.”

Apparently, these comments from Diaz have reached the ears of UFC President Dana White, who did not disagree that the Stockton, California based brothers are not likely to fight this year. In fact, the UFC boss offered an even more bleak outlook, suggesting that we may never see them in the cage again.

Do you think there are any fights that could drag the Diaz brothers back into the Octagon, or is Dana White accurate in his assessment of things?