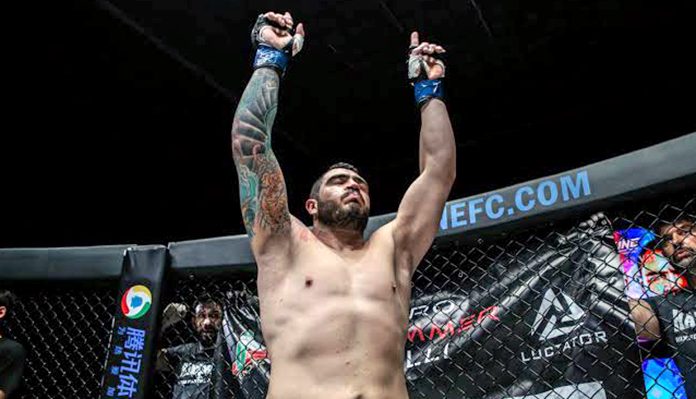 2019 hasn’t been a great year for MMA in Italy, as most of the Italian fighters signed to the biggest international promotions haven’t been able to bring victories home. Of a total of 22 fights, Italian athletes have only won 6 of them.

One of those winners was Mauro Cerilli (13-3; 1-1 ONE 1-1), former Cage Warriors heavyweight title-holder and current ONE Championship heavyweight contender.

“The Hammer” is set to face Indian-Canadian wrestler Arjan Bhullar (9-1) on October 13 at the second part of ONE Championship: Century, in Tokyo.

“I had to welcome him this past August, but a leg infection forced me out of the fight literally hours prior the bout” Cerilli told BJPENN.com. “Anyway, I’m fully healed and have totally recovered from it now”.

As they say, though, there is nothing so bad that it is not good for something. In fact, what happened lead to realize a Cerilli’s long-awaited dream.

“I’ve always dreamed to fight in Tokyo. I’ve tons of respect for Japan’s people and their culture. I’m honored and humbled to fight in such a huge event. Just to fight there is already a victory to me”.

If that’s a victory, though, he most definitely wants to rack up another one that night, and in order to do that he has to pass through Arjan Bhullar.

“He’s very confident about his grappling skill. Of course he is! He’s a former Olympian wrestler. He also said that he has studied me, that he wants to put me out of my comfort zone because I’ve never fought being on my back. Well, if he actually thinks so, I’m sorry to say that he hasn’t studied me that well, then”.

During an interview with BJPENN.com’s own Tom Taylor, the former Olympian stated also that he thinks his striking ability is better than Cerilli’s as well.

“I don’t like to do these kinds of talk ahead of a fight, I usually let the cage speaks for me. I’m a well-rounded fighter too. What more can I say? We will see what is going to happen on Sunday”.

In the above-mentioned interview Bhullar also said he’s positive that with a win over someone like Cerilli, ONE will give him a title shot next.

“I think my opponent should talk less and focus more on me” Cerilli said. “He’s already thinking about the next step, as he already beat me. I could do the same, but I’m waiting for Sunday’s match to be over. Let’s see who could ask for that title shot”.

The Terracina native is now called to revert the stats and raise up the Italian MMA winning percentage. A percentage that some of the fans impute to Italy’s gyms and coaches.

“I’ve always done my training camps here in Italy. I used to do those on my own. Now I’m so lucky to train at Gloria Fight Center under a great coach in the likes of Lorenzo Borgomeo. Plus I have my own team, the Hammer Team, that helps me out every time I need it. I can’t and I won’t try to change their mind. That’s their opinion. I have family, three kids here. I’m not paying my training camp with my parents’ money. I have other priorities. Training in Italy works for me, but I respect other people’s opinions”.

In recent news, ONE Championship has announced the nomination of Italy’s well-known promoter Carlo Di Blasi as ONE Championship Italy’s president and there’s been a lot of rumors about the Asian promotion coming to Italy.

“If the rumors are true, I’m sure Carlo [Di Blasi] will do an excellent job expanding ONE’s brand not only in Italy, but in the whole European soil,” Cerilli said. “I wish I could headline a ONE’s event here in Italy. I would be truly honored to be ONE’s ambassador in my home country since I was the first Italian fighter to join their roster”.

A few days are left before these two giants clash in Japan. Who are you picking? Arjan Bhullar or Mauro Cerilli?