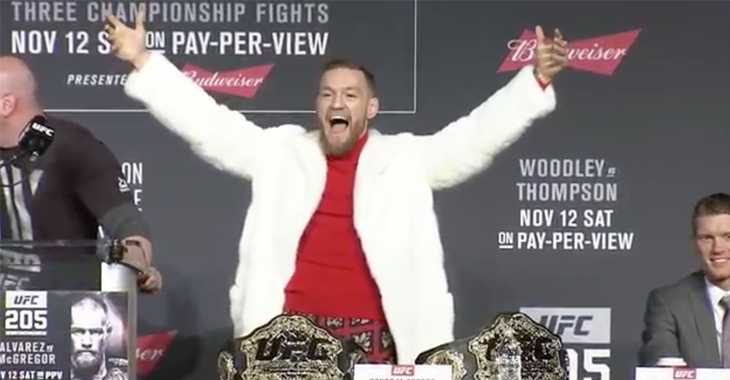 UFC 205 takes place this Saturday on November 12 with an absolutely stacked card. With the crucial middleweight fight taking place, many are focused on the main event of the evening between UFC lightweight champion Eddie Alvarez and UFC featherweight champion Conor McGregor.

In a recent exclusive interview leading up to this weekend’s historic card, BJPenn.com’s Chris Taylor asked Yoel how he felt about fighting alongside Conor McGregor on the historic UFC 205 fight card.

“You know I love Conor McGregor,” Romero said. “The guy is an amazing guy. It is exactly what we needed in this venue and in the UFC. He brings the showtime. You know he has made this sport grow and helped the economy so that all fighters can get paid more. And just being part of this event is a blessing. It is an honor to be here.”

During the UFC 205 pre-fight press conference that took place on Thursday, “The Notorious” surely brought the showtime that Romero speaks of. McGregor showed up late and yelled into the mic right in front of UFC President, “Sorry I’m late, I just don’t give a f–k!” Things got even crazier when Conor attempted to throw a chair at opponent Eddie Alvarez (check out the video here).

McGregor’s actions during the UFC 205 press conference surely caught the attention of the people.