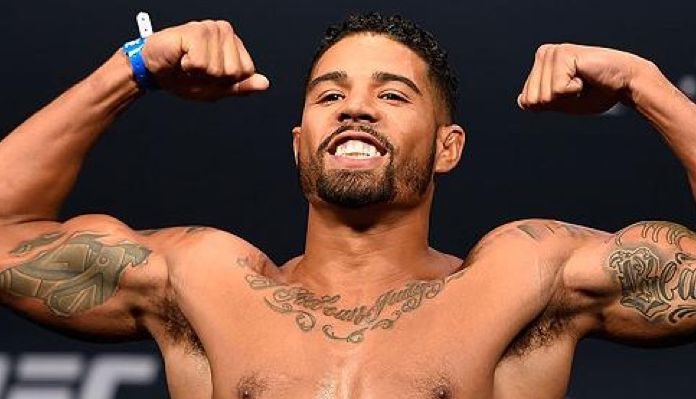 UFC Fortaleza is just days away, and the card is looking like a good one. On the card will be former UFC welterweight title challenger, Thiago Alves taking on Max Griffin.

For Griffin, this is the kind of fight he wants after losing his last fight to Curtis Millender.

“I’m excited man, I wanted this fight,” Griffin said to BJPENN.com. “These are the fights you want, the legendary names. For me, I grew up watching Thiago when I started fighting 10 years ago and he was one of my favorite fighters. To have a chance to fight this guy, I’m f*****g pumped.

“I have had a lot of close fights in the UFC and this game is a crazy game. Everybody is so good and that is what you don’t realize,” he continued. “The fights that I lost were so close. Like I could easily be 4-1 right now. I’m ready, it’s time to f**k everybody up. I want to start off with him because he is a big name. For me, these are the types of fights that I want. I want to fight the guys that I want to actually want to fight. I’m here to fight and put on a show.”

Alves has fought some of the top names in the sport in the likes of Georges St-Pierre, Matt Hughes, Carlos Condit, and Josh Koscheck among others. For Griffin, to be fighting someone like that who has been fighting in the UFC since 2005 is huge. He knows a win propels his career and makes him a bigger name.

However, it is also a dangerous fight. Although Alves is on a two-fight losing streak, Griffin knows he is still a dangerous adversary. As well, the fight will take place in Alves’ hometown of Fortaleza, Brazil. As such, Griffin expects to hear some boos as he walks out to the cage.

“I like it. It seems like I am a hitman for the UFC. They sent me to Mexico to fight the Mexican Ultimate Fighter winner. They sent me to Orlando to beat up Mike Perry,” Griffin said. “It is kind of my MO. I go out to their backyard and beat them up. Going into enemy territory, it puts me in a different kind of mode. It’s no longer fun in games. It puts my back against the wall, the whole country wants me to lose. It puts the pressure on the other guy and brings a different animal in me.”

Although Griffin knows Alves is a tough competitor, he is prepared to fight him anywhere. He understands Alves will be a tough out but Griffin is ready to push forward and see what Alves is made of.

“We’ll see. I’m going to take it to this guy, he is tough. I am going to put it on him and make him fight,” Griffin said. “Bring the fire into the kitchen so we will see how long he can last. It may be a decision, may be a knockout, submission. I’m ready for whatever. I’ve been training so hard.”

Ultimately, Griffin can’t afford to lose two in a row and knows he has to leave Brazil with a win. However, he isn’t worried about that at all because he believes with one loss you could get cut so you need to win every fight.

“They are all a must win. I have never lost back-to-back fights in my career. I learned a lot from my last fight,” Griffin said. “This fight with Thiago is perfect stylistically, his size, I have the reach on him. It is going to be a good night.”