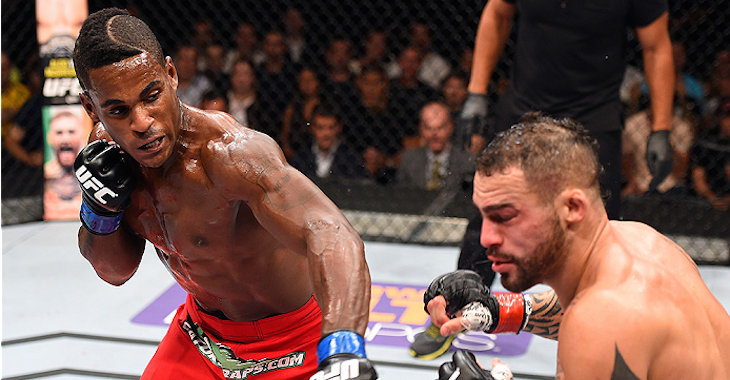 “The Monsoon” is still waiting on a call from the UFC in order to work out a new deal.

“To tell you the truth. Conor McGregor doesn’t really impress me. As far as his style and striking goes. To me he was just a 145-pounder that was big for the division. Don’t get me wrong he has accuracy. Which really is key to him. But I don’t know man. He’s not really a kicker. His striking is really just his hands. I don’t feel like he’s that great. Conor is not an all around striker. If you get what I am saying, his strongest point is that he is really accurate when he punches. I feel like because he was a big 145-pounder that was his key. He was able to hit guys on the button and put those guys down. I’m curious to see how he does against Eddie Alvarez.”

Larkin went on to explain that people should not have made such a big deal about Conor fighting at welterweight (170-pounds), as Nate Diaz is not a true 170-pound fighter.

“Diaz is not a true 170-pounder. Nate is a 155er. I don’t know why everyone was making a big deal about the welterweight thing. It was two guys (Diaz and McGregor) who were not anywhere near the size of true 170-pounders.”

“When it comes to his game, Conor is really on point with his strikes. But other than that I don’t see much else.”

Do you agree with the statements made by striking specialist Lorenz Larkin? Sound off PENN Nation!