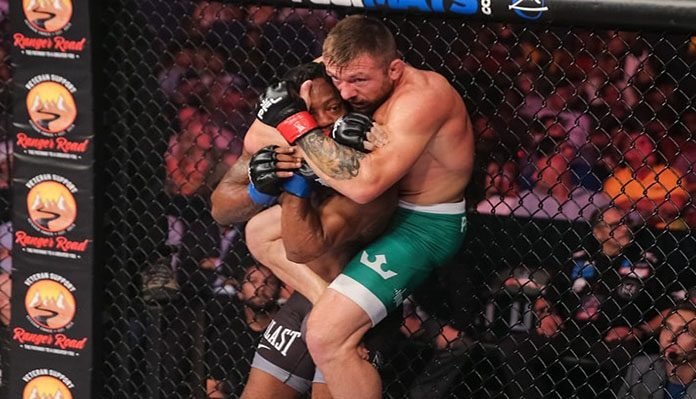 Fresh off his two-fight performance at last week’s (Oct 4, 2018) PFL 8, Lance Palmer is focused now more than ever on the million dollar prize at the end of the fight rainbow.

A longtime member of Team Alpha Male with the wrestling pedigree to match, Palmer has recently decided to branch out and seek training elsewhere. Nothing against Alpha Male, “The Party” just wanted to take his game to the next level.

However, once a wrestler, always a wrestler. And that’s one of the main reasons why Palmer chose to stay on with the upstart Professional Fighters League (PFL). He liked the format. Win and advance, that’s the name of the game Palmer says.

“It did actually,” Palmer said when asked if fighting two times in one night was a harkening back to his Ohio State wrestling days. “The weirdest part about it was it was just instinct to get back to my wrestling because we had to fight two people in one night. It was definitely pretty cool just to watch everyone try to find their way through as the tournament went on. It was pretty crazy.”

Two fights in one night is no easy feat regardless of your opponents. But when you have had to fight Max Coga and Andre Harrison back to back in 90 minutes, it’s a daunting task. This, however, was Palmer’s reality last Thursday night.

“Both those guys are extremely tough dudes,” Palmer said. “It was nice to get the Harrison one back. I broke my hand in the first minute and a half the first time we fought. I was still trying to use it to punch and things like that but my hand was so swollen I had no grappling ability or anything.” he continued, “The whole last year and a half [Harrison’s] side has been saying that wouldn’t have mattered. So I wanted to go out there and prove that was the difference in the fight. It felt good to get that one back.”

There may be no sweeter victory in combat sports than getting even with someone who has beaten you in competition. Strangely enough, this is the position that Palmer’s opponent finds himself in on New Year’s Eve.

Palmer defeated Steven Siler at the first ever PFL show last November. Now, these two will rematch with much more than just a victory on the line. But make no mistake about it, Lance Palmer understands what’s at stake.

“Even a year ago, I thought Siler was a scrappy opponent that I could maybe fight again,” Palmer revealed. “He’s always going to be there in your face no matter how hard you hurt him. I won the decision but he is a tough son of a b*tch and I’m excited to get another fight with him.”

Let us know what you think. Who will become the first ever PFL featherweight million-dollar champion? Will it be Lance Palmer or Steven Siler?