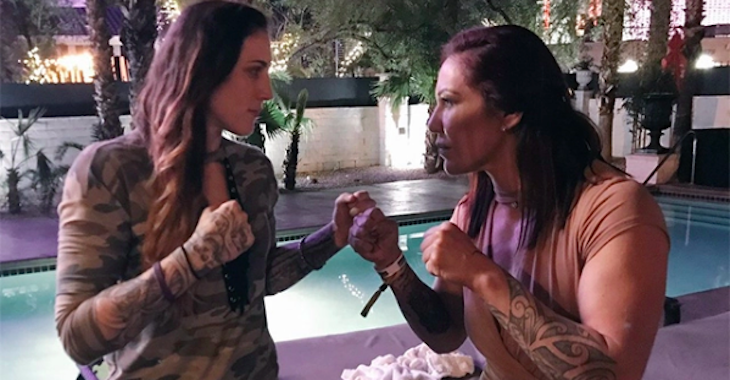 Just days removed from her exciting UFC 219 victory over Holly Holm, UFC women’s featherweight champ Cris Cyborg is already looking ahead to her next fight. The champ is now hoping to fight Invicta featherweight queen Megan Anderson, ideally when the UFC touches down in Anderson’s native Australia with UFC 221 on February 11.

While Cyborg has heard the calls for a superfight between herself and UFC women’s bantamweight champion Amanda Nunes, she feels that it’s important for her to fight a legitimate featherweight like Anderson in her next fight – and for a pretty noble reason.

“My management has already asked for Megan Anderson in Perth [at UFC 221],” Cyborg told BJPenn.com’s Tom Taylor. “I have faced four-straight opponents who have come up in weight to fight me. I am glad the UFC has made the featherweight division for me, however, it is time to see them be committed to the sport and help continue to establish a true world ranking at 145 [pounds]. I don’t want to see the featherweight division go away when I finally retire, for me it is important to grow the sport and [create] opportunities for other women.”

“Megan Anderson has won the opportunity to fight me by winning fights in the featherweight division and establishing herself as the #1 contender,” she continued. “If Megan Anderson can not fight, then I feel the next bout should be a girl like Pam Sorensen who is ranked and has been fighting at 145 helping build the division.”

“Amanda [Nunes] would make for a great fight, however she left 145 and hasn’t competed at that weight in half a decade. For me, I have spent the past two years  fighting “super fights” in the UFC. It is important for me to show that there are contenders at 145 who have earned the right to fight in the UFC. If Megan Anderson isn’t ready to fight I want to face someone else from the featherweight division.”

Is a Cris Cyborg vs. Megan Anderson fight the one to make?