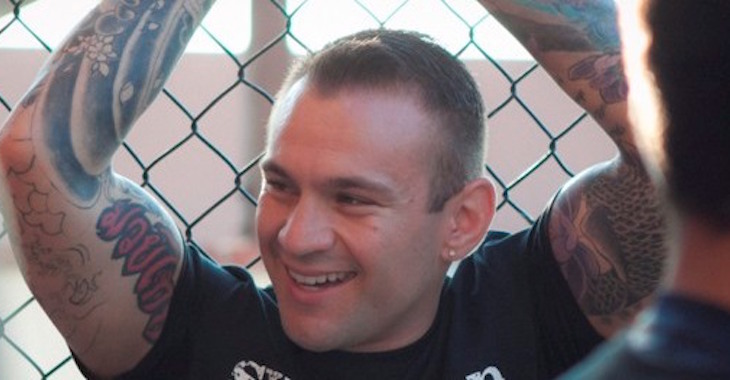 UFC and Bellator veteran Chris Saunders will step into the cage against Brandon Morris in a lightweight title eliminator bout tomorrow, Friday, June 26 that will also serve as the main event at BAMMA USA: Badbeat 16.

The bout is a quick turnaround from Saunders’ fight in April, and forces him to miss Ramadan for the sake of training camp.  Saunders, however, feels it will be worth the sacrifice.

Keith Harmon:  I noticed you’re making a quick turnaround.  You last fought in April.  Any particular reason for the quick return?

Chris Saunders:  I like it.  When I first started my career I was always being active and that’s what made me comfortable.

When I was on The Ultimate Fighter, all the fights started to slow down and it was really hard to get fights.  I’m really happy that I turned around right away and got back in the gym.  The only bad thing is that I’m not doing Ramadan this year.  It would be too hard to be fasting and training right now.  That’s the only downside of having to get back into the gym.

I’ve talked to my friends and family and they told me not to fast because my chances of winning would go down, so that’s the best thing for me.  I’m still making my prayers, and I know everything is going to be okay.

KH:  In a prior interview you talked about Dutch style Kickboxing.  What’s the difference between that and other forms of Kickboxing?

CS:  The Dutch style is very much a part of my blood.  My family is Dutch and Moroccan.  My brother and I train that style.  The difference is that we both have our gloves and shin guards on.  What it looks like to the (naked) eye is sparring, but it’s not.  When you throw a low kick, you’re actually kicking, and when you hit a combination, he throws the same one back at you.  It’s more effective than say Muay Thai where you have to hold the mitts for someone, and then you do a round and then it’s your turn.  It’s very slow.  With the Dutch style, you’re actually making contact with the body the entire time.  It’s really tough, but it makes you tougher for the fight.

KH:  You said people should find a good gym that fits them when they start out.  How has The Sweat Shop helped you progress?

CS:  The fact that I have my brother there teaching classes – you know holding the mitts for me, he’s there to correct me, and I feel that’s important to me.

At big gyms, you don’t get the time you need because there are so many other guys there.  That’s something that happens in fighting and some people deal with it better than others.  From what I’ve seen from going gym to gym is that people get neglected.  I bring in people who have trained at other gyms.  I’ve brought in taller guys.  Morris is 6 feet.  I’m 5’8,” maybe 5’9” on a good day.  I’ve brought in guys who are taller than him and I pretty much have free range to bring a person in for a specific (task).

KH:  You said BAMMA feels like home.  Could you elaborate on that a bit more?

CS:  The fact that they treated me so good from the beginning.  It’s the first time I’ve had contact throughout an entire fight camp.  They’d check up on me and see how I was doing.  Other fight promotions wouldn’t do that.

With interviews, it felt like being in the UFC and being on TUF.  It felt like a bigger promotion.  I really felt like for the first time in a long time, it’s ‘Worry about the fight, we have everything else.’  That makes a big difference.

Also, in the backroom they have big mats there to warm up.  So you’re not warming up in the dirt, and they have a nice big room.  You’re able to watch the fights in the back room; it’s entertaining.

No other, smaller promotions do that.  Even when I fought for Bellator, I wasn’t able to watch the fights in the back.  I was only able to do that in the UFC.  It feels like home since they’re so good to me.

The owner, Brett (Roberts), was able to get me a sponsorship with CNP Performance, which makes great stuff, and he brought it to my house.  I mean who else does that?  I’m sure I’m not the only person that’s been taken care of like that.  It’s a good feeling knowing these guys have your back and they want you to do well.

KH:  What was the experience of being on the live version of The Ultimate Fighter like?

CS:  It was an amazing experience.  I learned a lot of things; some things that I thought I had down, like weight cutting.  The best weight cuts I’ve had, (have been) since then.  Better eating habits and so many smart things to do with training.

If you look at my last two fights, I won both with guillotine chokes.  When you’re training with Team Alpha Male and Urijah Faber, it only added to my game.  I learned a lot, and being able to pass it on to other people is a plus.

KH:  You’re fighting Brandon Morris.  What are your thoughts on him as an opponent?

The thing you have to respect is that he comes from a big camp.  He comes from Team Quest with Dan Henderson, a big legend.  You know he’s in there with top guys day in and day out.  Am I going to scare him?  I don’t think so.  I have to go out there and do my thing and put it on him.  I don’t think my name or how many fights I have, is going to scare him.  I’m just going to have go into the ring and do my thing.

KH:  How has social media helped your visibility?

CS:  I think that the biggest thing is Instagram because you can post your pictures, and everyone sees what you’re doing and your day-to-day life.  I’m a regular guy.  I’m not going to post stupid things on there.  I’m a normal guy who just likes fighting.  People respect that it if you’re a humble down to earth guy, and (can see) that (online).  That helps out a lot.

KH:  You said you enjoy hockey.  What are some of your thoughts on the Stanley Cup?

CS:  I could give a (expletive) about the Stanley Cup.  My Montreal Canadians were out so I didn’t give a (expletive).  I stopped watching after we got our asses kicked by Tampa Bay.  I was over it.  I love hockey.  I was actually playing it until my last fight, and they won the championship. So they didn’t even need me.  I love hockey and love watching kickboxing.  I love Glory.  If I had to choose between MMA, Boxing, and kickboxing to watch, I would choose kickboxing.  It’s the purest form of martial arts.