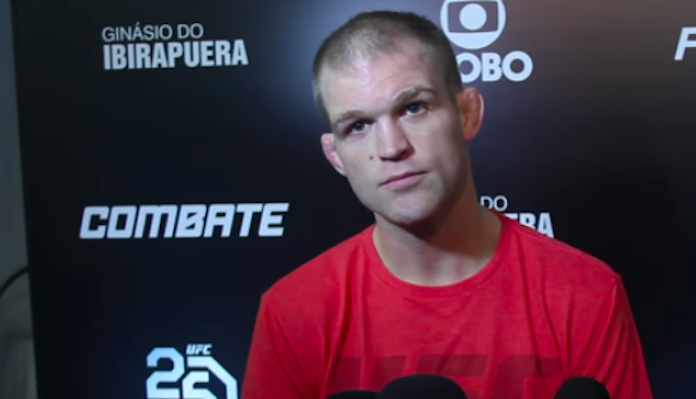 Heading into his UFC Sao Paulo showdown with Francisco Trinaldo, long-time lightweight contender Evan Dunham assured that he would be retiring after the card.

Unfortunately, this planned retirement fight didn’t go the way Evan Dunham planned, as he was put down by a vicious body shot from his Brazilian foe. While Dunham clearly would have preferred to retire on a victory, he assured post-fight that, despite the widespread trend of retired fighters mounting comebacks, his retirement will be permanent. In fact, this loss only served to reaffirm his choice to hang up the gloves.

“I already knew what I was going to do, going into this fight win, lose or draw,” Evan Dunham said during a told MMA Fighting post-fight (transcript via Sherdog). “My last three losses have come by body shot knockout. I have a responsibility to myself and the fighters coming up behind me to know when you’re body is telling you to quit. It’s time to quit, time to hang it up.”

“I’m not coming back. I’m happy. I’ve got plans. I’ve got things already set up and going that I want to do….I have no intentions of coming back at all. I’m ready to move on.”

Looking back on his career, Evan Dunham says he is happy with the way he performed.

“I’m very happy with my career and wouldn’t change a single thing,” he said.

Over the course of his impressive career, Evan Dunham battled some of the best fighters the UFC lightweight division had to offer, such as Sean Sherk, Melvin Guillard, Nik Lentz, TJ Grant, Rafael dos Anjos, Donald Cerrone, Edson Barboza, Ross Pearson, Joe Lauzon, Beneil Dariush, Olivier Aubin-Mercier and Trinaldo. He retires with an overall record of 18-8-1.

Congrats to Evan Dunham on a great career!