Petr Yan could not resist the opportunity to get a shot in at middleweight fighter Eryk Anders following UFC Vegas 21.

Anders (13-5 MMA) was one of many fighters to weigh in after Yan lost his title to Aljamain Sterling by way of disqualification at UFC 259. The now former bantamweight champion had landed a knee to the face of ‘Funkmaster’, while he was grounded, which caused an unfortunate end to the fight.

Eryk Anders had joked that Petr Yan was “playing by PRIDE rules”, which of course was a Japanese promotion that allowed knees to grounded opponents.

Most recently, it was Anders who made the walk to the Octagon, this for a middleweight bout with Darren Stewart. The fight resulted in the use of another illegal knee, as Eryk Anders hit ‘The Dentist’ with a foul at 4:37 of the very first round. Stewart was unable to continue, and thus the contest was ruled a no-contest. 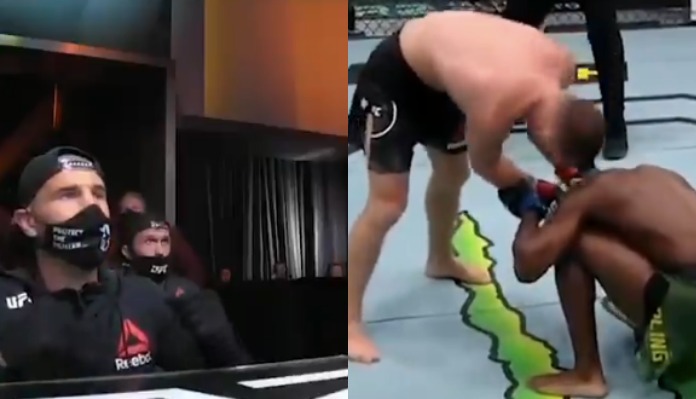 The reason Petr Yan was issued a DQ while Eryk Anders was given a no-contest is due to the fact that the referee deemed the middleweights strike to be accidental.

Due to his previous remarks, Yan could not help but rub some salt in the wound of Anders.

Petr Yan is of course attempting to secure an immediate rematch with Aljamain Sterling in hopes of reclaiming his bantamweight title. Prior to his DQ loss to ‘Funkmaster’, the Russian standout had put together a ten-fight winning streak. During that impressive stretch, Yan went 7-0 under the UFC banner, which included stoppage wins over MMA legends Urijah Faber and Jose Aldo.

Meanwhile, Eryk Anders had entered Saturday’s UFC Vegas 21 event in hopes of rebounding from his recent loss to Krzysztof Jotko. Prior to that setback, ‘Ya Boi’ was coming off back-to-back wins over Vinicius Moreira and Gerald Meerschaert.

Who do you think landed the worse illegal knee of the pair, Petr Yan or Eryk Anders? Share your thoughts in the comment section PENN Nation!