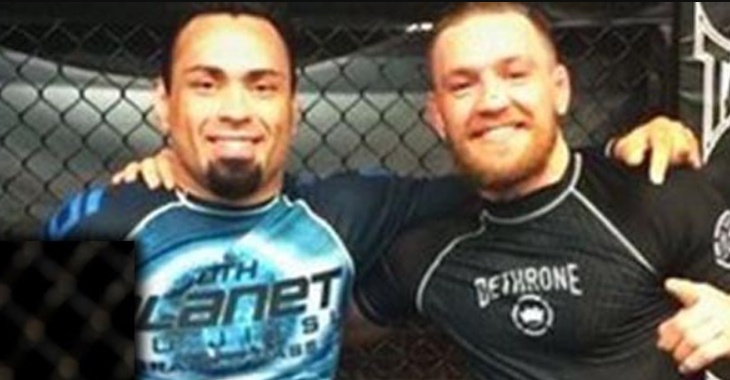 Eddie Bravo may most famously be known for his appearances on his good friend and UFC commentator, Joe Rogan’s podcast. But people may often not know or forget that he’s actually one of the best and most successful BJJ practitioners in the world today. Bravo is Interim Lightweight champion, Tony Ferguson’s main BJJ coach and Bravo did an interview recently on the Outside the Cage podcast where he commented on how Conor McGregor‘s ground game is:

“He came into my gym a few years ago and he looked good. The fact that he came through and jumped in with my animals I got there shows that he’s willing to…you know, the thing about Jiu-Jitsu is it’s different from striking in you can train striking everyday and get like, the ultimate striking training everyday and never get into a winning-losing situation, like never get in an actual fight. But with Jiu-Jitsu, every day you’re getting in actual winning-losing situations where people are getting tapped out and losing. So that aspect of Jiu-Jitsu, which is the aspect that people get obsessed with and fall in love with and it’s also the aspect that scares the shit outta people and makes them run away from it. They don’t want to lose. Especially when you’re a UFC fighter.”

“I can’t really give away too much, but you know…first of all Khabib isn’t going to be the toughest guy I think in the Lightweight division period, for a very long time. Conor [McGregor] would be an easier fight for Tony.

Khabib is gonna be tough, I mean nobody is doing what he’s doing with his ground and pound and with his takedowns and with his ground control, his smashing. He’s the best, probably of all time, literally. So it’s a tall order, it’s a tall order but most people are running from Khabib when they’re on the ground. They’re just spending most of their time trying to get back up, trying to drag themselves up on the fence and he just rides them and drags them down.

At some point with Khabib you can’t just be trying to drag yourself back up to your feet all the time. We’re gonna turn around and attack him. We’re going to thank him for taking Tony down. And we’re gonna throw some fire at him, it’s going to be different. No ones done that to him. Anything can happen, i’m sure Khabib’s defense is gonna be tight and he’s gonna be ready, he’s gonna be studying rubber guard and all that stuff but we’re gonna come at him with fire and we’re not going to be running on the ground trying to drag ourselves back up and climb the fence. That’s not gonna happen.”

Ferguson and Khabib are expected to meet at UFC 223 on April 7 in Brooklyn, New York.