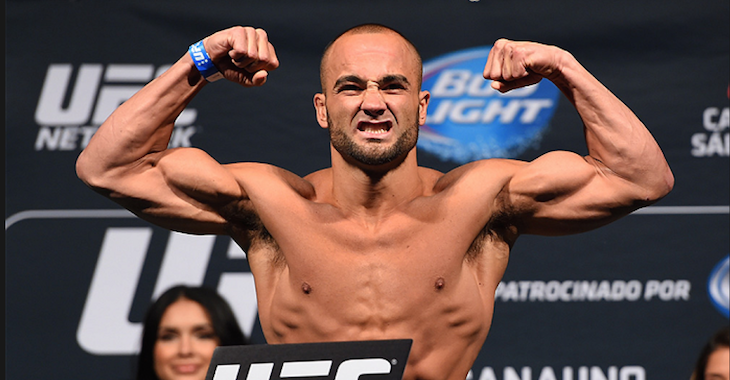 Earlier this month, it was revealed that UFC lightweight champion Eddie Alvarez would be stepping in the Octagon on November 12th to defend his lightweight championship against UFC featherweight champion Conor McGregor in the main event of the historic card. The announcement was followed up by the UFC 205 press conference on Tuesday afternoon, where Alvarez and McGregor came face to face for the first time.

With that being said, when the two came face to face for their first staredown at the conclusion of the press conference, it was McGregor who was clearly the taller man. After the training session, Stephen ‘Wonderboy’ Thompson revealed on UFC Unfiltered that Eddie Alvarez barely weighs less than he does despite the fact that Thompson, who is 5 inches taller than Alvarez, fights at 170, and Alvarez fights at 155:

“He’s a big dude man,” Thompson said. “I didn’t realize how big he was. We trained last night and he must be walking around like what–180? That’s only like, 5-pounds less than I am.”

Great late night training last night w these monsters @chrisweidmanufc @wonderboymma @ealvarezfight big thanks to coach @mark_henry7 for coming up and putting us thru it. #UFC205 #UFC205 #IronArmy

Weidman will be making his return to the Octagon on the card after losing his middleweight championship to Luke Rockhold at UFC 199 earlier this year. Thompson on the other hand will be looking to dethrone welterweight champion Tyron Woodley. Last but certainly not least, Edgar will be looking to return to the win column by defeating Jeremy Stephens.