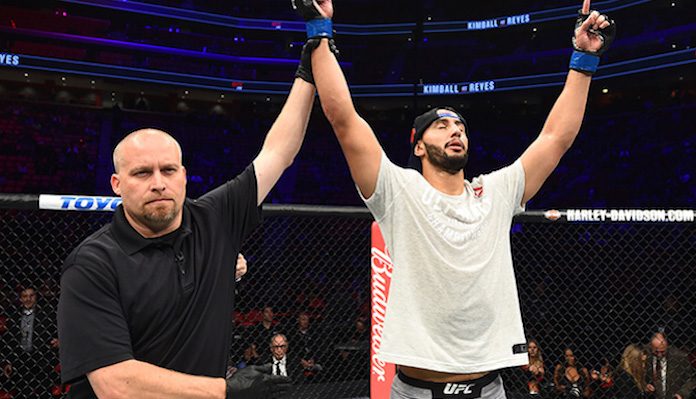 Dominick Reyes is one of the fastest rising talents in the UFC light heavyweight division. That said, the undefeated fighter is content to take his time rising through the UFC ranks, allowing himself to evolve into a complete mixed martial artist before he starts mixing it up with the division’s top dogs.

All the same, Reyes is hoping to fight one top light heavyweight in particular in the future: Alexander Gustafsson. Speaking on the latest episode of BJ Penn Radio, Reyes admitted that he draws quite a bit of inspiration from Gustafsson, and that he’d like to share the Octagon with him somewhere down the line. “I feel like he’s a legend and I’d like to get in there with him one day and fight a legend,” Reyes continued. “How often do you get to fight a legend in your mind? That would be cool. I’m really impressed by him and his movement and everything he’s doing.”

For the moment, however, Reyes believes fighters like Jared Cannonier and Gian Villante are probably more suitable opponents for him.

“I’d like to fight Villante, maybe then Cannonier, and get in the top-15, man,” he said. “That’s what I’m looking at right now.”

What do you think the future holds for undefeated light heavyweight prospect Dominick Reyes? Do you think he can work his way up to a battle with Alexander Gustafsson? Join the conversation in the comments section.