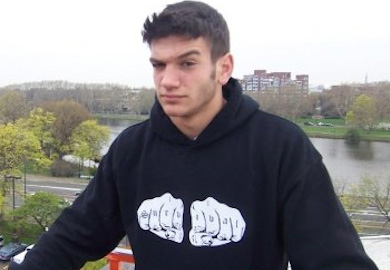 Yesterday we learned that UFC veteran Josh Grispi was arrested for some horrific domestic violence charges. (More on that HERE)

Today we have new information in the form of transcripts from text messages where Josh threatened his wife prior to the most recent incident in which he allegedly beat her and had his pit bull attack her.

Check it: (Via: Middleborough’s “Wicked Local”)
“UR (expletive) dead and if u even try n bring my kids into it the worse it will b for u and if u try and make a seen (sic) I’ll choke u unconscious and smash ur throat and if u get worse n run around after I’m goin to let Buddy have at u and I’ll walk out of the room.”

“Don’t cure (sic) you whore, That’s all u think abor (sic) ur a (expletive) scum bag piece of (expletive) who I’m goin enjoy choking to death.”

“U better not b bluffing about cops cuz I don’t joke ur dead when I see u… Literally. I don’t care I’m going to beat u n throw u to buddy, Ur dead.”