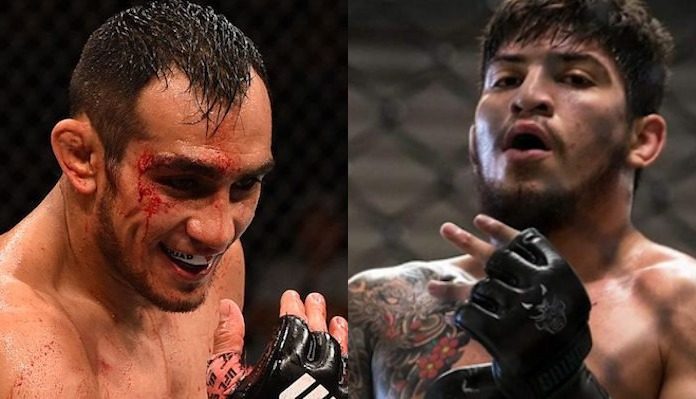 Danis’ back and forth with Ferguson began several days ago, when a fan asked who would win a grappling match between the two dangerous submission specialists.

Danis promptly replied, acting as though he thought the fan was joking.

can you guys stop with these jokes it’s embarrassing https://t.co/g1aR4Zjmxs

“Can you guys stop with these jokes,” Danis said in his first Tweet. “It’s embarrassing.”

On Sunday, Ferguson replied, imploring that his and Danis’ names should not be mentioned in the same sentence.

Yes Stop, Dont Include Me W/ This Peon Who Thinks He Can Fight. I’d Sleep This Dweeb. 🖕😎 🇺🇸🏆🇲🇽

“Yes Stop, Don’t Include Me W/ This Peon Who Thinks He Can Fight,” Ferguson responded in one of his classic, over-capitalized Tweets. “I’d Sleep This Dweeb.”

Danis then fired back, referencing the freak accident that forced Ferguson out of his anticipated UFC 223 lightweight title fight with Khabib Nurmagomedov. To remind, Ferguson is said to have tripped over a wire shortly after wrapping up an interview.

you can’t even beat a wire, relax el cockcuey https://t.co/spQQnfaf7o

Tony Ferguson has not fought since of October of 2017, when he submitted Kevin Lee to capture the UFC interim lightweight title. The plan, of course, was for him to battle Nurmagomedov for gold at UFC 223, but this plan was unfortunately nixed due to his aforementioned injury.

Danis is 1-0 as a professional mixed martial artist. He recently made his debut under the Bellator banner, where he submitted Kyle Walker in the first round. His accomplishments in the grappling realm, on the other hand, are enormous.

If Dillon Danis and Tony Ferguson met on the grappling mats, who do you think would win?