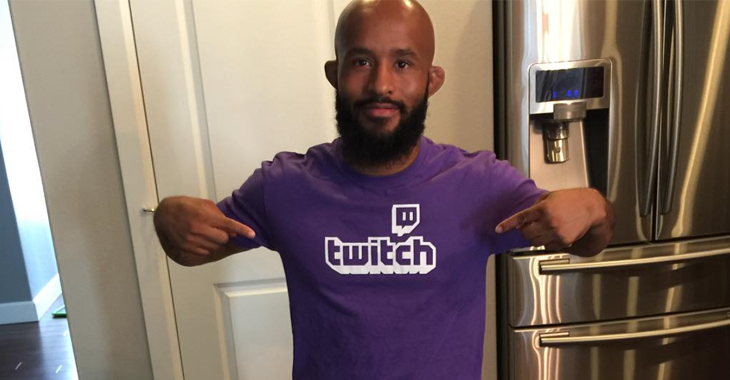 Did you ever think you would hear that a former UFC champion hung up his gloves, only to pick up a gaming remote control?

UFC flyweight champion Demetrious “Mighty Mouse” Johnson is looking to do exactly that. Maybe, not just at this very moment. Being often talked about in the debate of the pound-for-pound best fighter on the planet, Johnson is slowly building his gaming career up as his main occupation of beating people up as a world champion MMA fighter is taking up most of his time.

Johnson was a recent guest on the Three Amigos Podcast and spoke about his sights in the gaming industry (transcribed by Bloody Elbow):

I heard you could watch people play videogames, and that’s how I discovered Twitch. This is when I had Tyren, who is now two and a half years old. I would rock him to sleep at night, and he would take a while, so I downloaded the Twitch app to watch. I saw guys playing games I grew up with like Mega Man X and Zelda: Ocarina of Time. So after some time I started streaming some games on my PS4. I’d have like two viewers in there as I played Final Fantasy 14: A Realm Reborn.

Next thing you know, my wife was like, ‘You should get into it baby, what do you want to do after you’re done fighting? Why don’t you try streaming?’ Then Twitch reached out to me and told me everything I needed to get to be a serious streamer. All of the credit goes to my wife, she’s the one who suggested I do it. I decided if I was going to do it, I had to be 100% in. I didn’t want to do it half-assed and try to stream from my PS4 or Xbox One, so I bought a computer and she was all in, so I was like, ‘Let’s do it.’

Since I’ve started streaming I spend at least 15 hours a week playing games, maybe more. My brain needs to be stimulated. I look at streaming like a side project, and I take my side projects and my jobs very seriously.

Streaming on Twitch isn’t just about playing videogames, it’s about building a community amongst your fans. Right now most of my community is MMA fans, but I’m hoping to break down that barrier and attract the gaming community. I don’t just play first person shooters, I don’t just play the UFC game, I play Bloodborne, Dark Souls, Overwatch, Diablo, StarCraft.

You have to think about what you’re going to do after your career. I’ve always thought about going back to work at a warehouse or whatever I need to do to make ends meet, but now streaming and video gaming is just kicking off. All I care about is the next game coming out next month. I’m still fighting, I’m in the prime of my career and train my ass off every single day, but I’m starting my second career now. Why not? I’m building my viewership and community now, so when I’m 38 years old and I’m done fighting I can have streaming as my main source of income, hopefully.