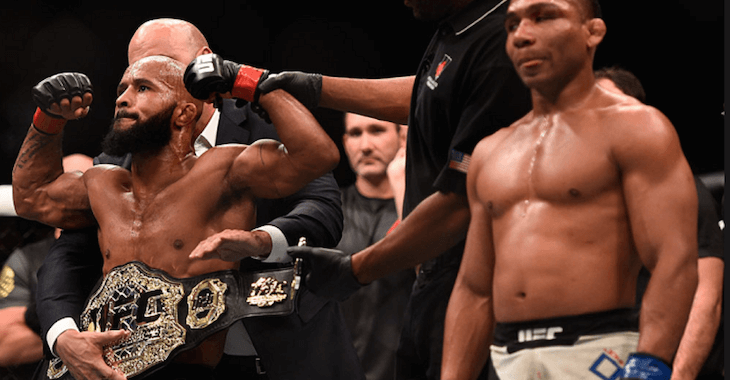 At UFC 191 we saw a rematch between UFC flyweight champion Demetrious Johnson and John Dodson. This time around we didn’t see those big punches from Dodson connecting and dropping the champ, we saw the champ’s dominance in a five round beating.

Never once did Dodson seem to have any advantage during the fight. It seemed like just another day in the park for the man Joe Rogan calls the P4P best fighter on the planet.

Sure he gets a lot of crap for not brining in big numbers and for some reason fans want to boo him and say he’s not exciting, even though he’s finished the majority of his last few fights, but who cares. This guy goes in there and leaves no doubt that he’s the champ.

Check out what other UFC fighters had to say about the fight and the champ’s performance:

More has happened already than the entire heavyweight fight #ufc191

Interesting round one this is an awesome fight!!

These dudes are faster than hamsters #UFC191

It's past these 2 little guys bedtime

You always expect DJ and Dodson to be fast, but damn. These guys are fucking fast #UFC191

I want @TJDillashaw to fight Dodson so they can stop talking bout the last one. #ufc191

The dude booing probably can't see wtf is going on since they're moving so fast.

Demetrius and Hume are two of the all time great coach and fighter teams there has ever been in this sport.

…I'd love to see him clean up his shot selection with his kicking game and find his patience when his opponent is backed up on the fence.

Hope you are watching this clinic @FloydMayweather my man @MightyMouseUFC is boxing his ears off!! @UFC #UFC192