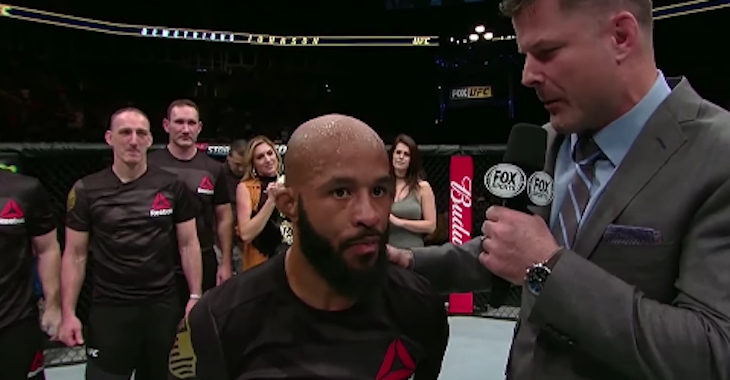 In the wake of Johnson’s latest win, many members of the MMA community are once again suggesting that he could be the greatest fighter in MMA history. In the opinion of former fighter and current UFC commentator Brian Stann, there’s no question. Stann explained his reasoning on a recent episode of The Anik and Florian Podcast (via MMAFighting.com). His words:

“I definitely thought he was the best pound-for-pound [before his fight with Reis] and as I watched him prepare for this fight, the question really started to arise to me over whether he’s the best ever. And in terms of technique and capabilities, I think there’s no question. The thing that people tend to question [with regard to Johnson] is the strength of schedule. Anderson Silva, brilliant striker who’s got some submission capabilities, he has nowhere near the wrestling credentials or ground and pound that Demetrious Johnson has.”

“In my eyes, the best ever was Georges St-Pierre before D.J. and I just thought GSP’s total dominance, his ability to take the fight and dictate where it goes, takedown defense, offense, the ability to end a fight striking and on the ground – I thought he was the best ever. But when you add up everything: being so fluent lefty, righty, angles, hard to hit, beautiful offense, power – he was doing legitimate damage to Wilson Reis during this fight – mixing in punches, kicks, excellent boxing, kickboxing, wrestling ability from both sides, passing the guard consistently, having an answer for every single position, being good off his back, having excellent submissions. To me, this fight solidified the fact that he’s the best to ever do it.

“When I look at the strength of competition, we all know, the lower you go in weight, the more technical you need to be in this sport. You can get away with a lot of things in the heavier weight classes, especially when you go north of welterweight. 185, 205, 265, you don’t have to be as good of an athlete to be considered world class. When you drop to 170 and below, you’re talking about world-class athletes and in my eyes, right now, Demetrious Johnson is the best to ever do it.”

Stann then weighed in on Jon Jones – another contender for the greatest of all time title. Apparently, Jones can’t currently be called the goat as he hasn’t been active enough.

“You have to take into account the lumps in [Jones’s] legacy, the pitfalls,” he said. “We’ve got to see him return and if he can return and if he can return and he can get consistency – to become a Greatest of All Time, consistency is a big factor, that’s one of the reasons why Anderson Silva is in that conversation. He’s never looked as good, in my opinion, all around, as Jon Jones or Georges St-Pierre; he certainly has at striking. But consistency is a big deal and failing different tests, things of that nature, they all matter. But if Jon Jones can come back and regain the light heavyweight crown and then he goes up and does what I think he can also do which is gain the heavyweight crown, absolutely he can take over that status. The thing that everyone knows about Jon is, it’s always up to him. He’s the only guy that can beat him.”

Do you, like Brian Stann, consider Demetrious Johnson the best ever? Sound off, PENN Nation!